From 'untouchable' to role model 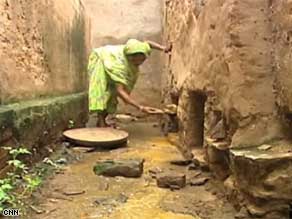 Illiterate and married off at age 10, Chaumar was forced into the only livelihood her family has known for generations.

As a Dalit, the lowest level in India's complex caste system, she was a so-called scavenger, a person who collects the garbage, feces and urine of other higher caste people. In the eyes of many, that would make her too disgusting to touch.

Traditionally, the age-old Hindu caste system is a social hierarchy that determines what occupation a person should pursue. Broadly, the system has four major castes and thousands of sub-castes.

At the upper rung are Brahmins, the priestly class; followed by the Kshatriya or warrior caste; the Vaishya, the trading community; and the Shudras -- trades like carpenters, barbers and metalworkers. The Dalits are involved in menial professions that no one else wants. Hundreds of thousands of Indians are believed to fall in this category.

Officially, the caste system has been outlawed, but millennia of tradition have left deep dividing lines in Indian society.

In the town of Alwar in the northern state of Rajasthan, there are about 300 so-called "untouchable" women working in this profession.

For her efforts, Chaumar got paid $7 to $10 a month. But it helped to feed her three children.

India has laws against "manual scavenging," as it is called. But the work is still around, in part because of the poor sanitation system in India. In many parts of the country, especially in rural India, many toilets are dry bucket toilets (named for the way they are shaped) that are not hooked up to any pipes. The waste just drops to the ground below.

Manju Atwal says she cleans 20-25 bucket toilets a month and makes about $20 per month, which helps feed her six children.

"For the past 20 years my life hasn't been a life. The world treats us like insects," Atwal said. "I want to walk upright, get a good job and get rid of this dirty work so the world wouldn't oppose us. We want to walk with the world," Atwal said.

Now 56 former "untouchable" women from Alwar are getting their wish. They are quitting their demeaning jobs and walking with their heads held high, no longer invisible to those around them.

Dr. Bindeswar Pathak of Sulabh International is their guide.

"I saw their conditions, and I thought they were living like ... pigs," Dr. Pathak said. "So why not give them some alternative jobs ... to do something else."

Dr. Pathak happens to be from India's highest caste. His interest in helping Dalits began at an early age.

"While I was a child at 13 years old, I touched an untouchable. For that my grandmother forced me to swallow cow dung, cow urine and Ganges water to purify myself," Pathak said.

He was dismayed at the experience and for the past 40 years has made it his mission to elevate the downtrodden. So far, his organization says it's helped more than 60,000 "untouchables" and installed more than a million of its eco-friendly, humane toilets in India alone.

The United Nations Development Program estimates 2.6 billion people do not have access to a clean and safe place to go to the toilet. It is a recipe for deadly disease.

The U.N. deemed 2008 the Year of Sanitation to bring awareness to the importance of proper sanitation.

Dr. Pathak and the former "untouchables" of Alwar were invited to New York to illustrate that point and also be honored. Pathak took 36 of the women to the United Nations, the women's first trip outside India.

In New York, the spotlight shone on the women, as they strode down the runway modeling the blue saris that they now design and tailor.

The former sanitation workers used to spend their lives covering their faces so they did not upset those around them. Now they are objects of admiration.

Usha Chaumar was singled out for her amazing accomplishments: She can read and write now and is no longer doing the dirtiest of work. She was crowned "Princess of Sanitation Workers" at the United Nations.

Watch Chaumar wear the crown and describe her life before »

It is a title that will take time to get used to after being treated like dirt for most of her life.

"I am overjoyed getting this honor in New York and wearing this crown," Usha said.

"There was a time when there was only filth on my head, and now it has a gold crown."