BEIJING, China (CNN) -- The latest phase of six-nation talks on North Korea's nuclear program ended Saturday with agreement on a timetable for North Korea to disable its nuclear facilities, according to South Korea's news agency, Yonhap. 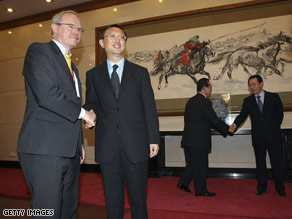 North Korea agreed to complete dismantling of its Yongbyon nuclear facility by October in return for the completion of energy assistance to North Korea by the United States, South Korea and other countries by the same time, Yonhap reported.

"The parties formulated a timetable for economic and energy assistance with disablement of the Yongbyon nuclear facilities," according to a joint statement issued by the six countries involved in the talks, reported by Yonhap.

The parties to the talks also agreed on a system for verifying North Korea's compliance, including "visits to facilities, review of documents, interviews with technical personnel and other measures unanimously agreed upon among the six parties," the statement said.

The six-party talks, which had been on hold for the past nine months, resumed in Beijing on Thursday after several perceived positive developments in efforts to dismantle North Korea's nuclear program.

In addition to the United States and the two Koreas, China, Japan and Russia are taking part in the talks.

While the senior negotiators ended their talks Saturday, Yonhap reported that their deputies would stay in Beijing to work on more details.

North Korea made a public show of its destruction last month of a water cooling tower at the Yongbyon facility where officials now acknowledge they extracted plutonium to build nuclear weapons.

The destruction of the highly visible symbol of North Korea's long-secret nuclear program came just a day after the country released details of its program.

For months, North Korea has been dismantling other parts of the facility under the the watchful eyes of representatives of the six nations that have been involved in the talks.

On June 26, North Korean officials turned over a 60-page declaration to China, written in English, that details several rounds of plutonium production at the Yongbyon plant dating back to 1986.

In it, North Korea acknowledged producing roughly 40 kilograms of enriched plutonium -- enough for about seven nuclear bombs, according to the U.S. State Department.

In response, U.S. President George W. Bush said he would lift some U.S. sanctions against North Korea and remove the country from the State Department's list of state sponsors of terrorism. But he made clear that other sanctions remain in place on North Korea -- which has been on the list since its alleged involvement in the 1987 bombing of a South Korean airliner that killed 115 people.

Other nations are providing food and energy assistance to the secretive nation. South Korea said Thursday it would ask Japan to join other regional countries in providing aid to the North.

North Korea agreed to abandon its atomic weapons program on a promise from the other five nations in the talks that they deliver energy aid equivalent to one million tons of heavy fuel oil.

But Japan has refused to take part, saying Pyongyang must first resolve the issue of Japanese citizens abducted in the 1970s and 1980s. Tokyo claims North Korea kidnapped 17 Japanese nationals. Five have been repatriated and Pyongyang says the rest have died.

North Korea has said it will not move on to the next phase of dismantling its nuclear weapons program before receiving all of the energy aid it has been promised.

To address Japan's concerns, Pyongyang has reopened an investigation into the abduction issue. Tokyo is awaiting the results before deciding whether to provide the aid.