KABUL, Afghanistan (CNN) -- A car bomb went off on a crowded street Monday near the Indian Embassy in Afghanistan, killing at least 41 people and wounding more than 100, officials said. 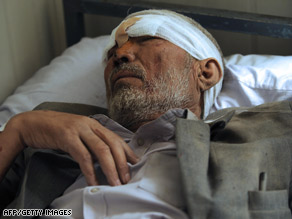 An Afghan man lies in a Kabul hospital Monday after being wounded in a suicide bomb attack.

Authorities said the attack in the capital of Kabul was the work of a suicide bomber, and it prompted swift condemnation from the Afghan president, the Indian government, NATO and the White House.

Among those killed was an Indian defense attaché and a political consul, said an Indian diplomatic source. The person spoke to CNN anonymously because he is not authorized to comment officially.

"It is very important to say that among the dead were innocent civilians and shopkeepers, women and children," said Interior Ministry spokesman Zemarai Bashary.

The embassy is in the center of Kabul, across from the Interior Ministry and close to several other government buildings. Dozens of people line up every morning outside the embassy gates to apply for visas to India.

"We heard an explosion, then the dust and glass hit our faces," a resident near the scene of the blast said. "After that we saw that people were dead and lying everywhere." iReport.com: Smoke rises from blast zone

A man who answered the phone at the Indian embassy abruptly hung up, saying, "We are not fine. All communications have been cut off."

Afghan President Hamid Karzai deplored what he called an "abominable act" and said it "is the work of the enemies of Afghanistan's friendship with India."

"India has made a significant contribution to development and reconstruction efforts in Afghanistan. Resorting to these types of hellish acts will not damage the friendly relationship between Afghanistan and India."

The Indian Ministry for External Affairs said the country's ambassador in Kabul was overseeing arrangements for medical assistance.

"The government of India strongly condemns this cowardly terrorists' attack on its diplomatic mission in Afghanistan. Such acts of terror will not deter us from fulfilling our commitments to the government and people of Afghanistan."

Gen. David McKiernan, the commander of NATO's International Security Assistance Force, called it a "cowardly attack" that underscores the lack of concern insurgents have for Afghans.

"These criminals have and will use the most extreme forms of violence to try and disrupt the rebuilding of Afghanistan and sow fear in the population."

ISAF said insurgents in Afghanistan this year have killed "more than 350 citizens and wounded nearly 800."

"Extremists continue to show their disregard for all human life and their willingness to kill fellow Muslims as well as others," White House spokesman Gordon Johndroe said, condemning the attack.

The blast sent plumes of smoke into the air and was heard for miles across the city.

Kabul, like the rest of Afghanistan, has been rocked by explosions in recent months. Authorities blame the Taliban -- the Islamic militia that once ruled most of Afghanistan -- and its al Qaeda allies.

"Extremists continue to show their disregard for all human life and their willingness to kill fellow Muslims as well as others," White House spokesman Gordon Johndroe said, condemning the attack.

On June 1, a remote-controlled bomb targeted a mini-bus carrying Afghan army personnel. The blast killed a woman and wounded five others -- all civilians.

Three days before that, a suicide bomber struck a convoy of international soldiers in eastern Kabul. Three civilians were killed. No soldiers were hurt.

All About Afghanistan • Kabul