TOYAKO, Japan (CNN) -- President Bush on Sunday defended his decision to attend next month's Olympics opening ceremony in Beijing, saying that to boycott "would be an affront to the Chinese people." 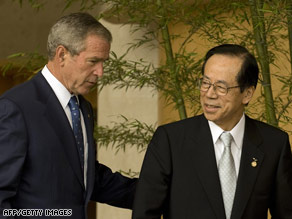 Speaking to reporters ahead of this week's summit of the Group of Eight industrialized nations in Japan, Bush said he did not need to skip the ceremony to show his position on religious freedom and human rights in China.

He said if he failed to attend the Games it would "make it more difficult to be able to speak more frankly with the Chinese leadership."

Bush said he would raise concerns when he meets Chinese President Hu Jintao at the Olympics, but he was also "looking forward to cheering the U.S. athletes." He said it was good for them "to see their president waving that flag."

Japan's Prime Minister Yasuo Fukuda also said he would attend the opening ceremony despite concerns about human rights in China that prompted some other European leaders to boycott the event.

Bush and Fukuda took questions from reporters at the picturesque lakeside resort of Toyako on the northern island of Hokkaido, where the G-8 summit will begin Monday.

Bush said he and Fukuda discussed the United States' recent decision to lift some sanctions against North Korea and remove the communist nation from the State Department's list of state sponsors of terror.

Bush assured Japan that the issue of North Korea's past kidnappings of Japanese citizens will not be ignored by the United States. He told Fukuda that he was "fully aware of the sensitivity of the issue in your country" and that "the United States will not abandon you on this issue."

North Korea has admitted to abducting 11 Japanese citizens -- to teach its spies Japanese language and culture -- but had insisted the abduction issue was resolved.

Holding a book about a young Japanese girl abducted by North Korea, Bush said as the father of two girls he "can't imagine what it would be like to have a daughter disappear."

Bush said North Korea's recent destruction of a water-cooling tower at its now-defunct nuclear facility and its declaration outlining its plutonium program are positive steps, but there are "more to be taken."

Lifting sanctions would not weaken the pressure on North Korea to be forthcoming on the abduction issue or in nuclear negotiations, the U.S. president said.

Bush said North Korea remains the most sanctioned nation in the world and that "delisting did not get rid of their sanctions."

Fukuda, who is chairing the G-8 meetings, said global warming would be high on the agenda but that he could not predict what might result from this week's talks.

Fukuda said he believes the United States "has not lost its sense of direction" on the issue.

"Our views are gradually converging," he said.

Bush said the United States "will be constructive" in the global warming talks "but if China and India do not share that same aspiration, we're not going to solve the problem."

Bush said the United States and Japan leads the world in research on clean technologies. He said Japan's advances in battery technology will some day mean that Americans "will use batteries in cars that look like cars, not golf carts."

Soaring oil and food prices and possible steps against Zimbabwe were also likely to be high on the agenda at the summit.

With fewer than 200 days left in his term, Bush says he will press other G-8 leaders to follow through on their commitments from earlier summits, but has warned there is nothing he or anyone else can do in the short term about oil prices.

"What's essential in this summit for George W. Bush is to make sure the world economy does not spin downward," he said.

Bush has downplayed what he and other G-8 leaders can accomplish on the economic front. "One thing we need to make clear when I'm with our partners is that we're not going to become protectionists, that we believe in free trade and open markets," Bush said Wednesday.

A former administration official who served on the National Security Council under Bush says the G-8's purpose is not to come up with quick solutions.

"This is not a meeting of heads of state that leads to a treaty. It's really kind of public opinion shaping and trying to get people to agree that issues are important," said Michael Green, now with the Center for Strategic and International Studies.