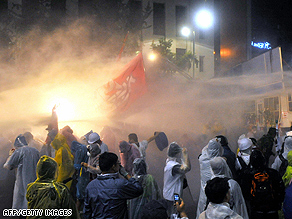 Police use a water cannon to disperse protesters during a rally against U.S. beef imports in Seoul on Sunday.

Clashes broke out after more than 15,000 protesters headed toward the presidential office, news agency Yonhap said.

The demonstrators used ropes to pull down police buses that had been parked around the presidential office to block the marchers from entering.

Many carried steel pipes and hurled rocks at officers. Police fired back with water cannons and fire extinguishers.

South Koreans have protested regularly since April when the government announced it would resume importing beef from the United States after a five-year ban. That ban was instituted over a case of mad cow disease in 2003.

The widespread public protests essentially paralyzed the government of President Lee Myung-bak, who replaced seven top aides this month and plans to reshuffle his cabinet.

After a series of negotiations, Seoul and Washington came up with a revised agreement on June 21 -- one that limits imports to cattle less than 30 months old. Animals more than 30 months old are considered at a greater risk for mad cow disease, which can be transmitted to humans.

The revised agreement also excludes the import of certain parts believed more susceptible to mad cow disease. The initial deal would have allowed the import of all U.S. beef imports.

U.S. Secretary of State Condoleezza Rice, during a visit to visit to Seoul as part of an Asian tour, emphasized Saturday that American beef is safe and that her government will continue efforts to win consumer confidence.

The assurance did little to placate demonstrators who took to the streets late Saturday night, leading to the latest riots.

Eating meat products contaminated with the illness has been linked to variant Creutzfeldt-Jakob disease, a rare and fatal malady in humans.

Until the 2003 ban, South Korea was the third-largest market for U.S. beef exporters. The U.S. beef industry has lost up to $4 billion since the market closed, according to the U.S. Meat Export Federation.

The imports are expected to resume this month.

All About South Korea • Lee Myung-bak