ISLAMABAD, Pakistan (CNN) -- Pakistan launched an offensive against the Taliban on Saturday, the biggest military push against militants in Pakistan's northwestern tribal region since a civilian government took power in March. 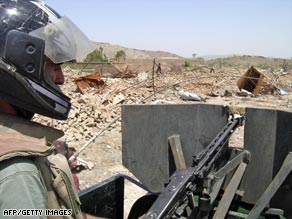 A Pakistan army vehicle patrols a troubled district of South Waziristan, in the northwest of Pakistan.

Army spokesman Gen. Athar Abbas said the operation occurred in the Khyber section of the tribal region, west of Peshawar, the capital of the North-West Frontier Province. And it comes as the new administration announced that it would get tough with radicals in the region.

There had been reports that Peshawar was being threatened by militants. Although Abbas said the reports were exaggerated, the military determined that the conditions in the area necessitated action.

Troops cleared three militant outposts and pushed the insurgents west, Abbas said. There were no immediate reports of militant resistance or any casualties.

The area is not far from the Afghan-Pakistan border.

The Taliban militant movement has a strong presence in the tribal region and in neighboring Afghanistan, and there also have been numerous attacks on that restive border in recent weeks.

U.S. Secretary of Defense Robert Gates said this week that he hopes a newly announced Pakistani effort to clamp down on Islamic militants in its northwestern tribal districts will improve the situation in Afghanistan.

"What has happened is that as various agreements have been negotiated or were in the process of negotiation with various groups by the Pakistani government ... the pressure was taken off of these people and these groups, and they've therefore been more free to be able to cross the border and create problems for us," he said at the Pentagon.

Meanwhile, the the U.S.-led coalition in Afghanistan reported that 32 militants had been killed two days ago during Afghan and coalition operations in southern Afghanistan.

The fighting occurred in Uruzgan province and the report comes amid Pentagon warnings of a "resilient insurgency" by the Taliban.

Afghan and coalition forces were ambushed Thursday during a patrol. They returned fire and called in airstrikes that killed three militants.

Soon after, the militants again attacked the patrol. The forces then killed 29 insurgents.

"During this engagement, insurgents attempted to disguise themselves in women's clothing in order to escape," the coalition said.

A child and two police officers were wounded.

This is the latest report of fighting across Afghanistan, where there has been an uptick in Taliban militant activities in the south, the east, and the Afghan-Pakistan border region.

On Friday, a coalition service member was killed in Farah province. The death toll of U.S. and allied troops killed in Afghanistan in June has reached 40, the highest monthly toll of the war.

Also, NATO's International Security Assistance Force were attacked in Paktika and Kunar provinces. Strikes in Kunar killed two civilians and wounded 11 others. Insurgents in both Pakistan and Afghanistan fired rockets at the Paktika base, but there were no casualties reported.

A Pentagon report on security in Afghanistan underscored the tenacity of the Taliban. It said that although there has been some progress in battling the Taliban, setbacks are expected.

All About Pakistan • The Taliban • Afghanistan