YONGBYON, North Korea (CNN) -- North Korea blew up part of its Yongbyon nuclear plant Friday, in full view of CNN and a handful of international broadcasters invited to witness this dramatic and symbolic event. 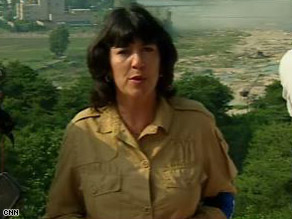 CNN's Christiane Amanpour was one of a handful of journalists permitted to see the tower's destruction.

The move came just 24 hours after Pyongyang handed in its long-awaited nuclear declaration and after President Bush responded by lifting some sanctions and removing North Korea from the U.S. list of states that sponsor terrorism.

The process is aimed at disarming North Korea in the "six-party talks" with the United States, China, Japan, South Korea and Russia.

Under supervision and assistance from the United States and the United Nations' nuclear watchdog, the International Atomic Energy Agency, the Yongbyon plant has been shut down since July.

The plant was no longer producing or reprocessing plutonium, which has been used for nuclear bombs. The cooling tower had been gutted and was an inoperative shell.

North Korea said it collapsed the tower, which technically could have been left for the next phase of negotiations, as a gesture of its commitment to the disarmament process. That process also requires the other parties to make reciprocal commitments to Pyongyang.

Before blowing up the cooling tower, North Korea took the press and officials to a hilltop overlooking the plant, about a kilometer away, for safety reasons.

After giving a signal to explosive experts below, a warning flare was fired, and three minutes later, a massive cloud of smoke covered the tower.

Bricks tumbled to the ground as the sound of the blast finally hit the area.

Watch the tower tumble in a cloud of smoke »

There was a moment of stunned silence as the magnitude of what happened sank in.

U.S. technical experts and others concerned about the complexity of collapsing the tower said they were impressed. One official from the U.S. Energy Department -- who would give only his first name, Bill -- told us, "They did such a good job. It's not simple to blow it up and bring it down."

After the explosion, Lee Yong-ho, Yongbyon's director of safeguards, took the press and officials down to survey the rubble.

He admitted he was sad to see the cooling tower come down, as this plant has been his life's work.

However, he added, "I hope the explosion of the cooling tower will make a contribution to peace, not only for the Korean peninsula but for the whole world."

There is still a long way to go before North Korea is fully disarmed.

There must be more negotiations and investigations of all its past, including whether Pyongyang has pursued uranium enrichment, as well as details of any nuclear proliferation.

As for the plutonium from Yongbyon and any weapons produced by North Korea, those are meant to be handed over as part of the next phase of negotiations.