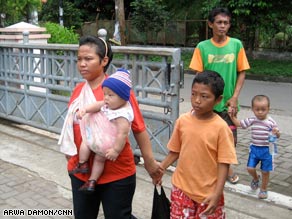 "Be tough. I am sorry you have to go," his grandmother whispers while hugging him.

His parents are taking Ahri to live in an orphanage. They swear they are not abandoning their son.

"I am not throwing my child away," says his mother, Nuraini, wiping away tears.

"I just want him to get a proper education. I hope that one day he'll do something useful for this country and help his brothers, because we are living in poverty."

The family lives crammed into a home that's 17 feet by 17 feet in a poor neighborhood on the outskirts of Jakarta. Nuraini runs a small shop the family opened to try to make ends meet. Ahri's father, Joni Lubis, collects bottles from the streets, selling them to plastic and glass factories.

Ahri's parents make $2 to $3 a day, with about half of that going toward their daily rent. With the increased cost of living, what's left just isn't enough to send Ahri to school and to feed him and his two brothers, 3-year-old Mohammed and 7-month-old Eka Jaya.

"I never imagined it would come to this," Nuraini admits.

But for many Indonesians, it has.

More than 80 percent of children in child care institutions have both their parents, according to the most recent survey conducted in 2006 by the Indonesian government. A recent study by Save the Children, UNICEF and the government says Indonesia -- the world's fourth most populous nation -- has more orphanages than any other country.

This year, orphanages are reporting even higher number of parents giving up their children because they can no longer afford to feed them or send them to school.

In the past year, the cost of living increased beyond many people's reach. In May, a 30 percent fuel hike set off countrywide protests.

Ahri peers intently as his mother signs off custody of him to the orphanage. The other children cram their faces up against the window to see the new arrival. At least half of them at the Putra Utama 1 orphanage have been through this before as well.

"The prices have gone up. [Families] can't balance their income with the prices," orphanage staffer Utari says.

It doesn't take long for Ahri to make new friends. Soon, he's stuffing rice into his mouth and chatting with the other boys.

His parents stand against the doorway and watch their son playing soccer. Here at least, there's enough space to do so.

"If my son can adapt, then I am happy," says Ahri's father, Joni Lubis. "I can see that it's calm and peaceful here. That makes me happy. So does the school -- my son can be educated."

Nuraini adds, "There has to be a better chance for my two other sons."

It's all they can hope for: that economic pressures will ease so they won't have to face such a decision again.

All About Indonesia • UNICEF • Jakarta