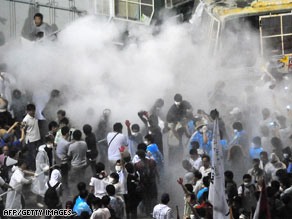 Police use extinguishers on protesters during an anti-U.S. beef rally in Seoul on Sunday.

U.S. beef imports are expected to resume this month.

A revised agreement between Seoul and Washington was confirmed on Saturday after a series of negotiations.

The agreement allows for the resumption of imports of American beef, but not from cattle older than 30 months, including the exclusion of certain parts believed more susceptible to mad cow disease.

"Our trade officials did their best," Han said. "I hope the public concerns will be fully resolved."

The initial deal that would have allowed the import of almost all U.S. beef prompted widespread public protests shortly after it was announced in April, essentially paralyzing the government of President Lee Myung-bak.

The ban on American beef products began five years ago, instituted over a case of mad cow disease in 2003.

Eating meat products contaminated with the illness has been linked to variant Creutzfeldt-Jakob disease, a rare and fatal malady in humans.

All About South Korea • Lee Myung-bak