LONDON, England -- A heartbroken Briton is one step closer to starting a new life as he tries to auction his "entire life" online following the break-up of his marriage. 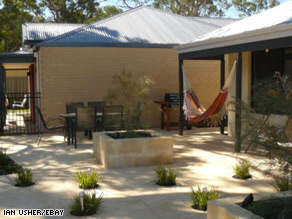 Ian Usher said he was selling his house and all its contents because they remind him of his marriage.

Ian Usher, who moved to Australia six years ago, is selling his house, car, job and even an introduction to his friends on eBay. By 1530 GMT on Monday bids had reached almost US $285,000.

Usher is saying goodbye to his three-bedroom home in the western Australian city of Perth and all its contents, including his car, motorbike, jet ski and parachuting equipment.

The auction closes at 2 p.m. Australian time on Saturday (0600 GMT) after which he said he would leave the country. "My current thoughts are to then head to the airport and ask at the flight desk where the next flight with an available seat goes to, and to get on that and see where life takes me from there," he said.

The 44-year-old, who originally came from Darlington, in northern England, will even include an introduction to his friends and a trial run at his job. "On the day it's all sold and settled, I intend to walk out of my front door with my wallet in one pocket and my passport in the other, nothing else at all," he said on his Web site, ALife4Sale.com.

Usher said he wanted a fresh start because his current life reminds him of his former marriage.

The couple parted a year ago but details of the breakup are only available to those who pay a fee on Usher's Web site.

He said: "Everything that I have -- the furniture in the house -- all has memories attached to it. It's time to shed the old, and in with the new."

Usher's employer at the rug store in Perth where he worked as a shop assistant, said she backed the auction. Her company vowed to offer the successful bidder a two-week trial run that could result in a permanent job.

She said: "When Ian came up with this idea, because we had seen him go through a break-up of marriage and pain and bits and pieces, I thought it was really exciting.

Usher said his friends in the city were prepared to be introduced to the highest bidder so he could advertise his auction as offering a complete lifestyle.