(CNN) -- The powerful underwater current changed without warning, dragging us down and threatening to sweep us out into open water, far beyond help. We scrabbled for a hold, grabbing rocks, smashing coral and kicking our legs in panic. 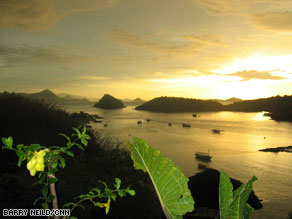 For 10 minutes I held fast, breathing hard through my oxygen mask, fearing the worst as, further out and beyond my reach, I watched my terror-stricken girlfriend Suzanne holding on for dear life.

This was my experience of exploring the underwater landscape of Indonesia's Komodo National Park, where a group of five European divers have gone missing.

Though remote, these waters are a tantalizing attraction for divers, offering stunning unspoiled coral and a variety of marine life virtually unmatched in other parts of the world.

Our diving instructors told us parts of the park are located at the point where the Indian Ocean meets the adjoining Flores Sea. At different times of the day the two waters empty into each other, a sea change that drives extraordinary currents.

The fast-flowing waters teem with life, attracting many species of colorful fish and giant manta rays the size of small aircraft that are the ultimate sighting for many scuba divers.

But the beauty belies the danger.

A pastime already fraught with the dangers of "the bends" -- the agonizing result of surfacing too quickly after breathing pressurized oxygen at depth -- diving becomes even more hazardous in fast-flowing water.

We came close to experiencing the worst of this in December 2004 when we embarked on a dive at a pillar of rock in the Komodo park that lies smack in the middle of the high-speed current.

Our instructors told us the lee of the rock offered shelter from the torrent, allowing exploration in calm waters. This reassured my girlfriend, an inexperienced diver already spooked by fast currents earlier in the day.

Within minutes of entering the water we were in trouble. While the rock did indeed offer some shelter -- and a dazzling array of fish and plant life -- it was no protection from the capricious tide, which moved in swiftly to claim its prey.

Conscientious divers always avoid touching rocks and coral to preserve the underwater eco-system, but as we faced being dragged to our deaths, we ignored the rules and grabbed at anything we could.

A friend, Sam, who was diving with us, managed to grab Suzanne and stop her from being sucked into the vast, roiling ocean behind us. Ten meters away, but grimly locked in my own battle, I could only watch them and hope for the best.

Luckily for us, the current soon relented, and we made our way cautiously to the surface -- gasping at the warm, fresh air above the water and clinging to the side of the small wooden boat that would take us back to shore.

Unsettlingly, it was only after our dive was completed that our instructors told us that a local, experienced diver had gone missing at the same spot just a week earlier. Needless to say, we didn't go back in the water.