(CNN) -- In India he's an icon and to the rest of the cricketing world he's simply known as one of the greatest ever batsmen. 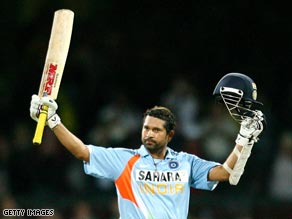 One the game's greats, Sachin Tendulkar is more than just a player in India, he's an icon.

Sachin Tendulkar picked up a bat at the age of 4 in Mumbai and from that day on fell in love with the game.

"The only thing that was on my mind was, 'I want to play for India one day,' and I was pretty sure and confident that one day I will," he told CNN in Mumbai.

In fact he made his Test debut for India at the age of 16 facing Pakistan's fearsome bowling attack, just two years after making his first-class debut for Mumbai.

Despite a baptism of fire in that first international match and getting hit on the mouth by a ball from Waquar Younis, he took his own game forward and has become known for the positivity of his play and the compact efficiency and brilliance of his shot-making.

Making his first Test hundred at the age of 17 against England he has racked up the records in a 19-year career.

In 2000 he became the first batsman to score 50 international hundreds, and is the highest scorer in One Day internationals. He joined an elite group in 2007 when he became only the third player to pass 11,000 runs in Test cricket.

Nicknames in cricket are common, but only if you're a really exceptional player do you get one that's complementary. Tendulkar has joined that elite as the "Little Master" which sits nicely next to other great batsmen, Viv "Master Blaster" Richards and Brian "The Prince" Lara.

But perhaps no higher praise came from Australian cricketing legend Donald Bradman who once said that Tendulkar was the only player that reminded him of himself.

Like all sportsmen he's suffered from injury, and now 35-years-old, many are wondering if his best days are behind him.

Playing for India against England and Australia last summer and at the beginning of 2008, many commentators thought that his normal aggression and daring were missing from his game. His form was also heavily criticized after the 2007 World Cup, and injury forced him out of the international series against South Africa.

But for the man used to batting away tricky deliveries, this criticism gets a typical positive response: "I'm not one to dwell on the past. I like to move forward and these challenges, these hurdles in between, they bring the best out of me. They motivate me even more."

He's currently facing the challenges of the rapid-fire version of the game in the Indian Premier League (IPL), masterminded by Lalit Modi, that despite it's glitz and hype has been criticized for losing some of the finer points of the sport.

"It's so full of excitement. I personally don't feel that it's dumbing-down the game. It's just another version of cricket. If the game is going to be globalized in the form of IPL, then why not? It's better for cricket," he told CNN.