PHNOM PENH, Cambodia (CNN) -- A recently disclosed memo gave U.S. interrogators the ability to use harsh methods -- what many call "torture" -- to extract information from terrorist suspects after 9/11. Around the world, critics saw it as another blow to American prestige and moral authority. 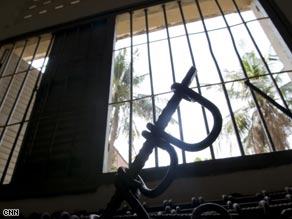 Cambodia's notorious Tuol Sleng Prison, where some 14,000 were held, is now a museum.

The 2003 document also invokes wartime powers to protect interrogators who violate the Geneva Conventions, for example, by the use of waterboarding -- when a prisoner is made to think he is drowning.

Half a world away, the divisive debate over whether waterboarding constitutes torture comes into sharp relief at the infamous S-21, Tuol Sleng Prison in Phnom Penh, Cambodia.

This is where the genocidal regime of Pol Pot and the Khmer Rouge imprisoned and brutalized its enemies from 1975 to 1979. I visited the once secret S-21, now a museum, with Van Nath, a former inmate. He remembers being brought here blindfolded and terrified:

"I thought that was the end of my life," he told me. "In my room people kept dying, one or two every day."

Van Nath was kept in a room packed with 50 other inmates, shackled together and forced to lie down.

"We could not sit. If we wanted to sit, we had to ask permission first. No talking, whispering or making noise," he told me.

Van Nath described how male prisoners were whipped raw, their fingernails were yanked out, they were hogtied to wooden bars. Prison guards mutilated women's genitals, ripped off their nipples with pliers. And worst of all, babies were ripped from their mothers' arms and slaughtered.

Van Nath was accused of being a CIA agent and given electric shock torture, but he survived when his jailers found out he was one of Cambodia's most prominent painters. And what did they make him paint?

"Pol Pot's picture. Big pictures," he told me. "I had to paint the same one again and again. If they didn't like my painting, that would have been the end of my life."

So when Pol Pot finally fell in 1979, Van Nath returned to paint what he had really seen and heard at S-21. He did it as a memorial to the 14,000 who had been tortured and executed in the prison. It's one of the few public reminders of the regime's crimes.

Take water torture, for instance. Van Nath remembers it as if it were yesterday. I gasped as I entered a room filled with his vivid depictions.

One of his paintings shows a prisoner blindfolded and hoisted onto a makeshift scaffold by two guards. He is then lowered head first into a massive barrel of water. Another shows a prisoner with cloth over his face, writhing as an interrogator pours water over his head.

Van Nath still remembers the accompanying screams: "It sounded like when we are really in pain, choking in water," he told me. "The sound was screaming, from the throat. I suppose they could not bear the torture.

"Whenever we heard the noises we were really shocked and scared. We thought one day they will do the same thing to us."

As he talked and showed me around, my mind raced to the debate in the United States over this same tactic used on its prisoners nearly 40 years later. I stared blankly at another of Van Nath's paintings. This time a prisoner is submerged in a life-size box full of water, handcuffed to the side so he cannot escape or raise his head to breathe. His interrogators, arrayed around him, are demanding information.

I asked Van Nath whether he had heard this was once used on America's terrorist suspects. He nodded his head. "It's not right," he said.

But I pressed him: Is it torture? "Yes," he said quietly, "it is severe torture. We could try it and see how we would react if we are choking under water for just two minutes. It is very serious."

Back then, Pol Pot and his Khmer Rouge cadres recognized this for what it was and used it with brutal efficiency. The Cambodian genocide ultimately killed 2 million people.

Fourteen thousand of them had passed through the gates of hell at Tuol Sleng Prison.

All About Pol Pot • Cambodia