(CNN) -- At 25-years-old, Fatima Bhutto is eligible to become prime minister of Pakistan. 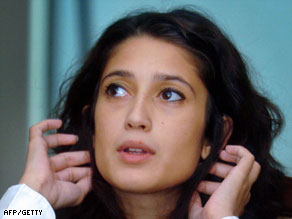 Outspoken critic of President Musharraf, a life free of politics is unlikely for Fatima Bhutto.

But the writer and poet, whose family name carries so much weight in Pakistan doesn't feel the burden of continuing the family's political dynasty.

Instead that fate has befallen her cousin Bilawal, who will have to wait 6 years before being able to run for office. The 19-year-old son of Benazir Bhutto was thrust into a political life when he was nominated as leader of the Pakistan People's Party (PPP) after his mother's murder last December.

For Fatima Bhutto, adding to the Bhutto family legacy is neither in her interest, nor her country's.

As outspoken about the current political climate in her homeland as she is committed to staying out of mainstream politics, Fatima Bhutto has had to deflect calls from many in Pakistan to enter into the political fray in the aftermath of her aunt Benazir Bhutto's death.

Many there who have partisan views on the Bhutto family dynasty see her as "the real Bhutto" as opposed to Bilawal Bhutto Zardari.

Despite some physical resemblances to Benazir, Fatima is making her own name for herself in order to live her life outside of the shadow of her famous aunt.

Shunning Oxford University she was an undergraduate at Columbia University in the U.S. where she read Middle Eastern studies before doing a masters degree in London at the School of Oriental and Asian Studies. While there she wrote her dissertation on the resistance movements to General Zia ul-Haq.

Having spent time in Lebanon and traveling extensively, she writes a regular column for Pakistan's The News International newspaper.

Working as a writer and poet, she has already published two books - a volume of poetry at the age of 15 after her father's death and a book on the 2005 earthquake in Kashmir from which the proceeds went to survivors of the disaster.

She was born in Kabul in 1982, and after her parents divorced she moved with her father, Murtaza, to Syria where he married a Lebanese ballet teacher.

Murtaza had left Pakistan when General Zia al-Huq hanged Fatima's grandfather and the former prime minister of Pakistan, Zulfikar Ali Bhutto. From then on there was a rift between siblings Murtaza and Benazir that persisted even when he and Fatima returned to Pakistan in 1993 after Benazir became prime minister for the second time.

With division between the two growing, Murtaza formed an unsuccessful splinter party to the PPP. In 1996 tragedy struck when Murtaza was shot and killed by police, an incident for which Fatima has said she held Benazir "morally responsible."

However, after Benazir's murder, Fatima put aside the family feud and attended her funeral. In her column in The News International, while restating her differences with her estranged aunt, she called for a moment of calm in Pakistan's politics.

She may resist the call to enter mainstream politics for now, but with such a family history and strong opinions, politics will always have a part to play in her future.

In a previous interview with CNN she gave her thoughts on the political culture in Pakistan: "It has to stop being this autocratic, dynastic environment... When that day comes and this happens -- that we have an open field -- if there's a way for me to serve this country, then I would be proud to."