All About: Religion and the environment 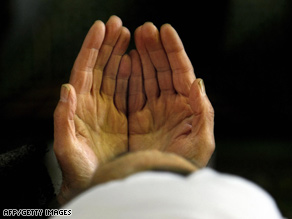 It is then only logical to surmise that religion also influences how we -- individually and collectively -- view our role with regards to protecting the environment.

To suggest that any one religion somehow cares more for the Earth than the others would be foolish and simplistic, but within each belief system there lie subtle differences that, many argue, give an indication as to how we view our position in relation to it.

Namely, there appear to be two opposing questions that the world's religions have sought to answer over time: Are humans an equal part of a greater organism which they should therefore respect, serve and nourish? Or is the very purpose of that organism to serve and nourish the human race?

As Lynn White wrote in what many view as a groundbreaking, yet controversial 1967 essay, "The Historical Roots of Our Ecological Crisis," published in Science magazine: "What people do about their ecology depends on what they think about themselves in relation to things around them. Human ecology is deeply conditioned by beliefs about our nature and destiny -- that is, by religion."

"Christianity," wrote White, "Not only established a dualism of man and nature but also insisted that it is God's will that man exploit nature for his proper ends." The emergence of Christianity, many, like White believe, marked the moment humans broke away from previously common held beliefs that all beings, all forms of life -- including plants -- had spirits (or souls).

"In Antiquity every tree, every spring, every stream, every hill had its own genius loci, its guardian spirit," he wrote. And Christianity changed all that, he believed. Man was created in God's image, Christians believed, and notably Man was created at the end of Creation and humans therefore inherited the Earth. "By destroying pagan animism," White wrote. "Christianity made it possible to exploit nature in a mood of indifference to the feelings of natural objects."

Many disagree -- and indeed are offended by -- the assertion that Christians do not care for the Earth and all of its beings and have dismissed White's conclusions. Marcia Bunge in her 1994 essay, "Biblical Views of Nature: Foundations for an Environmental Ethic," published by Chicago's Lutheran School of Theology's journal "Care of the Earth," claimed the Bible "contains ample grounds for environmental responsibility."

Bunge cited examples such as the story of Noah as evidence that God's covenant was not just with humans but with all creatures; that the name Adam stemming from the Hebrew word 'adamah', meaning ground or earth implied "the connection between human beings and the earth," and that, in the New Testament, Paul's vision of redemption or liberation through Christ's death did not just apply to humans but "of all creatures of nature".

Christians are not the only ones looking for guidance in the Old Testament. But when drawing from Genesis, the Jewish faith is not so much divided, many believe, more to say appreciative of two opposing ideas that can happily co-exist. As Daniel B. Fink's 1998 essay, "Judaism and Ecology: A Theology of Creation", published in "Earth Ethics", explains: "We are both a part of nature and apart from it." Jews understand, Fink says, that the fact that Man was created at the end of the sixth day could have two possible meanings: either humans are the "guest[s] of honor" at a great feast, or, it's a reminder in case humans become too arrogant "that even the gnats preceded them in the order of creation".

In that regard, the perception is that humans have a "unique" responsibility to "use nature's bounty to our benefit" while also recognizing that "each part of God's creation has its own intrinsic value". Humans, in the Jewish interpretation, are the stewards of the Garden of Eden, but vitally, they are looking after it for God, not for themselves. Underlying the Jewish ethic, Fink writes, is the belief that humans are "only tenants on this earth. The land belongs to God. We are given permission to enjoy the Creator's abundant gifts, but we must not waste or wantonly destroy anything."

Responsible stewardship is a theme also shared by Muslims. In "Environmental Protection in Islam" published by the Meteorology and Environmental Protection Administration of the Kingdom of Saudi Arabia, Prophet Muhammad's stance on the environment is quite clear: "Created beings are the dependents of God, and the creature dearest unto God is he who does most good to God's dependents," it says. Humans' good deeds therefore, "are not limited to the benefit of the human species but rather extend to the benefit of all created beings."

Similar to the Jewish and Christian faiths, human beings are seen in Islam as stewards of the environment, but more in line with Judaism, a principal belief amongst Muslims is that, a human is "only a manager of the earth and not a proprietor." Therein lies among Muslims an appreciation of a profound duty to protect the Earth, many believe. But vitally, the belief system is not just based on what humans do now, more what they set up for humans to come. Continuing the theme of stewardship, we are permitted to enjoy the fruits of the earth, but Earth must not be ruined for our descendents: "Man should not abuse, misuse, or distort the natural resources as each generation is entitled to benefit from them but is not entitled to "own" them in an absolute sense."

Hinduism is an immensely complex and diverse religion and shares certain beliefs with Buddhism, but essentially it is governed by three concepts: Brahman (a divine force which manifests itself in everything); Karma (the law of cause and effect) and the goal of moksha (enlightenment). At its core is living a simple life and shunning the myth of happiness through material gain.

"Hindu religion wants its followers to live a simple life ... People are meant to learn to enjoy spiritual happiness, so that to derive a sense of satisfaction and fulfillment, they need not run after material pleasures and disturb nature's checks and balances," writes Ranchor Prime for the Alliance of Religions and Conservation.

Notably, Hinduism appears to be a de facto supporter of renewable fuels, such is its adherence to sustaining the natural order of things. Hindus are instructed not to "use anything belonging to nature, such as oil, coal, or forest, at a greater rate than you can replenish it."

Buddhism -- with all its different subsets -- is viewed by many as the most environmentally-friendly religion of them all, mainly because it believes in the fundamental equality of all sentient beings: We are all born, we all age, then we all die. There is no reason therefore, they believe, why a human's experience specifically should be any more important than that of a pig or a cow. And as a result all beings deserve equal levels of empathy -- or as is oft referred to, 'loving-kindness.'

"All sentient beings share the fundamental conditions of birth, old age, suffering, and death...the mindful awareness of the universality of suffering produces compassionate empathy for all forms of life," writes Harvard University's Director of the Center for the Study of World Religions, Donald Swearer in Earth Ethics. And as he points out, that includes plants too

Interestingly, Buddhism has its own story of Creation, with its own kind of Eden, but with one key difference: "In the Buddhist mythological Eden, the earth flourishes naturally, but greedy desire leads to division and ownership of the land that in turn promotes violent conflict, destruction, and chaos. In short, in the Buddhist myth of first origins, human agency destroys the natural order of things." E-mail to a friend

(Sources: The Alliance of Religions and Conservation; Harvard University Center for the Environment; Adherents.org; ReligiousTolerance.org)