At 50, Cuba's revolution showing its age

HAVANA, Cuba (CNN) -- Thursday marks the 50th anniversary of the Cuban revolution, when Fidel Castro and a group of guerrillas toppled a longstanding U.S.-backed dictator. 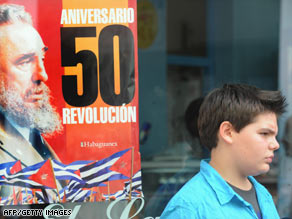 But January 1, 1959, was a long time ago. In Cuba today, when people refer to "the revolution," they often mean the country's aging, established government.

After so many years, people's hopes for the revolution's future are hardly revolutionary.

"I hope that it continues to move forward, because this country needs development. We're really behind," said a student who did not give his name.

"More opportunities in the economy and in transportation," another man said.

But there was a time when the goals were much loftier.

In the first days of 1959, when Castro and his bearded rebels rolled into Havana on tanks and other captured vehicles, they talked of sweeping changes -- an end to corruption, justice for the poor and independence from foreign domination.

Watch what some Cubans think of the 50-year revolution »

A half-century later, their achievements are a mixed bag.

The government often points to free health care as a measure of its success.

"Cuba is a global medical power," said Joaquín García Salabarría, the vice minister of public health. "Nobody can doubt that."

Also touted by the government: education. Literacy rates are among the world's highest, and access to higher education is widespread.

But students question why they can't travel freely, and why their access to the Internet is so limited.

Most Cubans can barely make ends meet, and while the government blames a U.S. trade embargo imposed in 1962, critics say it's just bad management. They say the gains of the revolution have come at too heavy a cost.

Television, radio and newspapers are all controlled by the state.

Cuba marks the 50th anniversary of the revolution with a new president, Raul Castro, who officially took the reins in February because of the prolonged illness of his brother, Fidel Castro.

But this year, Raul Castro faced three devastating hurricanes, rising prices for food imports and plummeting prices for nickel, one of Cuba's most important exports.

In a speech this week, the president warned Cubans -- who on average earn the equivalent of less than $20 a month -- to prepare for belt-tightening.

"The accounts don't square up," Raul Castro told the National Assembly. "You have to act with realism and adjust the dreams to the true possibilities."

That pragmatic approach is a far cry from the idealism in the early days of the revolution led by his brother.

"I think that celebrations of the 50th anniversary are also marked by a real sense that sustaining this experiment and institutionalizing it is going to require major, major lifting in a very short term by the people running the country today," said Julia Sweig of the Council on Foreign Relations.

That, in turn, could mean making changes to deal with a new environment. But, ironically, change is about the last thing people here expect from the revolution.