(CNN) -- Passengers have been rescued from a gondola dangling over a freezing creek after the tower snapped in half Tuesday at a ski resort near Whistler, British Columbia. 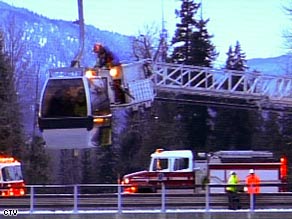 Rescuers try to reach the passengers trapped inside one of the suspended gondolas Tuesday.

Doug Forseth, senior vice president of the resort, said a total of 53 passengers had been rescued. He said no more people are trapped.

The section of the lift affected by the accident had 15 cars going up the mountain and 15 coming down at the time, but they were sparsely populated, Forseth said.

Three people were freed on the up side, each in a different gondola car, along with 50 people divided among the 15 cars on the down side, he said.

The accident occurred at a tower that was constructed in two pieces, and the top part came away from the lower part, Forseth said. He said resort officials did not know what caused the structural failure, but an investigation would be conducted Wednesday.

Tyler Noble, a reporter for CNNRadio affiliate CKNW in Vancouver, was on the scene at the Whistler Blackcomb resort about 110 miles north of Vancouver. He reported that at least two gondola cars hit the ground after the accident, both from relatively low heights near the tower that split and caused the system's heavy cable line to slacken.

"One hit a bus stop and the other hit a house," Noble said. "Another one was suspended over a creek, but everyone is out of that car."

Watch gondola dangle in the air »

"At no time was anyone in serous risk and at no time were the cars separated from the line," Wright said.

Canadian Television News footage showed rescuers walking down a fire truck ladder escorting passengers from one gondola over the frozen water. At least six people were trapped inside that cabin, which was the closest to the base of the mountain, CTV News reported.

Cynthia Jennings told CTV News she was in a car halfway down the mountain when the tower snapped.

"All we saw were other cars swinging sideways and we thought we were going to crash to the ground," she told CTV News by cell phone. "I thought the whole cable system was going to come down. I couldn't even breathe."

Authorities said they did not know the cause of the accident.

Plante, from Vancouver, was visiting the ski resort when the gondola snapped. Plante said he planned to go skiing Tuesday morning, but changed his mind.

"We just went for a walk, so I guess it's a good thing because we might have been one of the people stuck here," he said.

Skiers were evacuated from the area and the resort -- site of the alpine skiing venue for the 2010 Olympic and Paralympic Games -- was closed while authorities worked to remove riders from the cars and investigate the accident.

The gondola cars affected were close to the ground when the accident occurred, Boot said.