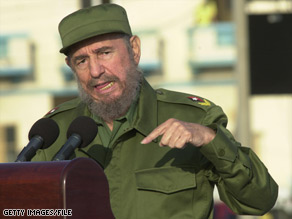 Former Cuban President Fidel Castro has largely been out of the political scene since falling ill in 2006.

"With Obama, one can talk whenever he wants, because we're not preachers of violence or war," the communist leader wrote in an essay published Thursday on a state-run Web site. "He must be reminded that the carrot-and-stick theory cannot be applied in our country."

Friday's missive marked the second time in recent weeks that a Cuban leader has said he is open to meeting with Obama.

In the latest issue of The Nation, actor Sean Penn writes of his recent conversation in Havana with Raúl Castro, who took over as president this year from his ailing brother.

According to Penn, Raúl Castro told him, "Perhaps we could meet at Guantanamo. We must meet and begin to solve our problems, and at the end of the meeting, we could give the president a gift. ... We could send him home with the American flag that waves over Guantanamo Bay."

Obama has called for the U.S. detention facility at the Guantanamo Bay naval base on the island of Cuba to be closed.

Despite the indications that the Cuban leadership is open to warmer relations with its neighbor to the north after 47 years of a U.S.-imposed trade embargo, some in Havana expressed skepticism that the impending change in leadership in the United States will translate in to a changed Cuban policy.

"Obama is a product of the American empire," Carlos Pose said.

But Elisany, a high school student, said she's hopeful. "We've got to wait and see. I hope things change."