LIMA, Peru (CNN) -- Tensions between Chile and Peru remained high Monday after last week's revelation that Peru's top army general said at a party that Chileans in Peru would be sent back in coffins or body bags. 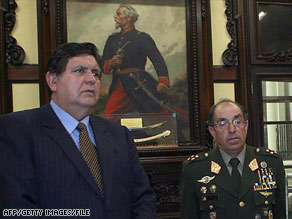 Chilean President Michelle Bachelet met Monday morning with her domestic advisers to discuss the matter after the Peruvian general appeared unrepentant over the weekend, the Chilean government reported on its Web site.

Peruvian President Alan García had called Bachelet last week to say that the statements by Gen. Edwin Donayre are not the official policy of Peru. Bachelet said at the time she was satisfied with García's explanation and it was "up to the government of Peru to take measures."

Donayre made the remarks in 2006 or 2007 at a party at a friend's house, said CNN affiliate station TVN in Santiago, Chile. The video was downloaded to YouTube in February and surfaced a week ago to wider attention.

"We are not going to let Chileans pass by," Donayre says in the amateur-quality video as he offers a toast. "Chilean who enters will not leave. Or will leave in a coffin. And if there aren't sufficient coffins, there will be plastic bags."

Tensions rose over the weekend when Donayre, who is scheduled to retire Friday, was widely quoted in Peru and Chile as saying that he will not be forced to resign early due to external pressure.

"I was named commander general under a presidential mandate and I can only be relieved under such an order. Not by necessity nor under pressure from another government," Donayre said, acording to the Peruvian Andina news agency.

Further heightening tensions, Donayre was quoted as saying that Peruvian citizens have a right to say whatever they want at private functions.

"I want to express and specify that it was not a speech nor a public act," Andina quotes the general as saying. "The situation in which what happened at a private gathering was spread worries me."

In the video, Donayre is surrounded by other uniformed army officials as well as people in civilian dress. It is not clear from the video in what context the general was making his comments. Nor was it clear in what forum Donayre made his comments over the weekend.

After Bachelet's meeting with top aides Monday, government spokesman Francisco Vidal declined to say whether Chile's ambassador to Peru would be recalled in light of Donayre's weekend statements.

"General Donayre's declarations in the past 24 to 48 hours only convince us that we are right and that our government's posture is reasonable," Vidal said on the Chilean government Web site.

In Peru, meanwhile, a member of Congress, Gustavo Espinoza, is under investigation, suspected of sending Donayre's videotaped comment to Chilean press and politicians.

"I would not have expected this conduct from any Peruvian, much less a member of Congress," said Aurelio Pastor.

Espinoza is already serving a 120-day suspension for leaking a private conversation with another member of Congress, Andina said.

Peruvian Defense Minister Ántero Flores-Aráoz told reporters Saturday that relations between the two nations will be repaired, calling the Donayre incident "a bump in the road."

Flores-Aráoz also said that Donayre's remarks about Chileans used "improper terms" that are not shared by the Peruvian people, Andina said.

Peru has not taken any measures against the general. His retirement Friday is required by law at the end of his two-year appointment as the army's top chief.

Donayre has been the subject of an investigation in recent weeks concerning the use of 80,000 gallons of fuel under his control as commander of the southern military region in 2006.

Chile and Peru have a long history of animosity, having fought in the War of the Pacific from 1879 to 1883. Hard feelings linger to this day.

More recently, the two nations nearly came to war in 1975 when left-wing Peruvian leader Juan Velasco, who was backed by Cuba, wanted to invade Chile, which was led by right-wing Gen. Augusto Pinochet. The invasion was called off and Velasco was deposed in a coup a short while later.

This year, the World Court agreed to look at an issue concerning Peruvian claims to a disputed maritime area.

All About Peru • Chile • Diplomacy