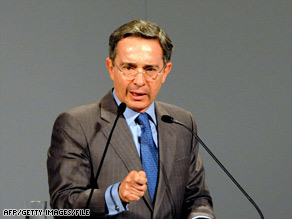 Speaking on a teleconference with the minister of defense and top officials in the military and police, Uribe said they should "accelerate administrative investigations" when they receive complaints alleging human rights abuses by security forces, a release on the Colombian government's Web site said.

Neither Montoya nor any of the dismissed officers have been charged. Criminal investigations are ongoing.

The bodies of the 11 men were found in a mass grave in northeast Norte de Santander province in September. The men's families had reported them missing, some as long ago as January.

The army initially said the men were guerrillas killed in combat.

However, officials said a subsequent investigation showed they were civilians who had been lured away from Bogota by the false promise of jobs by undercover military officials or criminals working in league with the military.

Colombia's attorney general's office said it is investigating almost 800 cases of extrajudicial killings allegedly committed by the security forces between January 2003 and September 2007, during the Uribe administration.

All About Colombia • Alvaro Uribe