What is it about that dress? 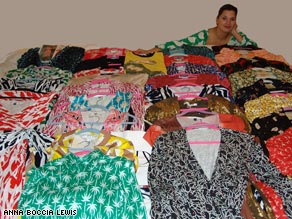 Anna Boccia Lewis has been a DVF fan since the 1970s. Do you own a wrap dress? Tell us why.

They teeter on gorgeous stilettos strutting their perfectly toned figures in clothing that could cost as much as a typical mortgage.

Close that same fashion magazine -- or maybe ever-so-gently hurl it at the wall -- and perhaps you're left feeling slightly inadequate and envious. After all, why should we be left out of all the fun just because we can't afford the clothing in the magazine?

But there is one fashion item that has arguably been bridging the gap for more than three decades between the wealthy elite and the average woman. This item is Diane Von Furstenberg's wrap dress.

Just like the "Little Black Dress," Furstenberg's wrap dress is considered an essential in many womens' wardrobes.

Diane Von Furstenberg, or DVF as she's known, sold her first wrap dress in the 1970s.

"It has been a unique phenomenon, " the Belgian designer told CNN. "What was new about my wrap dress was that I did it in jersey and therefore it molded the body and it was very flattering to the body."

Technically speaking, a wrap dress is like a kimono.

"It's a very traditional form of clothing, it's a dress that has no buttons and no zipper," said Von Furstenberg.

Since its inception, millions have flown off the racks. But that isn't to say the dress didn't see its dark periods as well.

There was a time when the trend for wrap dresses was declared over, but like any good (or bad) fashion, it experienced a revival.

"Fashion changed completely and things went away," said Von Furstenberg. "Ten years ago I started again because I saw that very hip young girls were buying them in thrift shops."

That trend continues today. While the dresses are stocked in DVF stores, they are regularly bought and sold in vintage stores and through online auction sites, such as eBay.

"My love affair with the DVF wrap dress began in the 1970s," says Anna Boccia Lewis, a self-confessed "DVF addict" from California.

"One of my first purchases was a yellow floral vintage DVF shirtdress that I found at Goodwill in South San Francisco for $4.75.

"I think what I love the most about Diane's designs is that each one has its own special personality -- just like the woman who is wearing it," Anna said.

CNN asked other women to tell us what it is about DVF dresses that make them so special. Tell us your story -- "Sound Off" below.

"They make me feel not only sexy, but successful, sophisticated and timeless," said Carolyn Yapp, a 24-year-old DVF devotee from Jamaica.

Melissa Calivis Green from Baltimore told us: "For me, the iconic prints represent a sense of powerful femininity and the promise of endless possibilities."

Tracey Jennings of the United Kingdom has been wearing DVF dresses for the last ten years. She said: "Like a lot of women, I have varied in size from year to year. As a result, my wrap dresses range from size four to size 10."

Kirsty Palmer, also from the United Kingdom, recently sold one of her DVF dresses on eBay. "I like to change my selection," she said. "Buying vintage wrap dresses makes them more affordable for me, yet I still get the benefit as if I were buying new due to their classic cuts and their durability."

Do you own a wrap dress? If so, we want to hear from you. Why did you buy it and what does it mean to you? "Sound off" below or Email us a picture or go to CNN's facebook page -- facebook.com/cnnintl.