Morales: Government will take over for DEA in Bolivia

(CNN) -- Bolivian President Evo Morales said Saturday that he was suspending the work of the U.S. Drug Enforcement Administration in Bolivia and that the government will take control of its activities in the war on drugs. 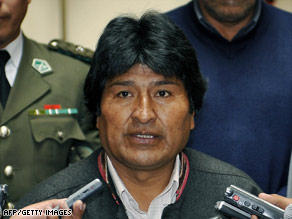 Morales made the remarks in a speech in a remote part of Bolivia, carried on national television and radio stations.

The announcement comes more than a month after Morales kicked DEA agents out of the country's coca-producing Chapare region, saying the government could no longer protect them amid a growing revolt. At least 30 people died in the violence, and Morales accused Washington of fomenting the unrest.

Bolivia and the United States each expelled the other's ambassadors in September as well, and Morales launched a verbal assault against the U.S. government at the United Nations General Assembly.

For its part, the United States accused Bolivia of not doing enough to stop the flow of drugs out of the country. Last month, President Bush said he had proposed cutting off special trade deals with Bolivia "until it fulfills its obligations."

As he left Bolivia after his expulsion, U.S. ambassador Philip Goldberg warned the Bolivian government that reducing ties with Washington was "a grave mistake."

Morales' accusations that the United States had helped foment the violence in his country are "false and baseless," Goldberg said in September, and Morales "insulted us."

The DEA has not been officially notified of any suspension or expulsion, spokesman Garrison Courtney said Saturday. He would not say how many agents are in Bolivia for security reasons but said it was not a significant presence.

"If this is true, it is an unfortunate situation," Courtney said. "We've been working with our counterparts for over 30 years and have a tremendous working relationship with our Bolivian counterparts."

The violence broke out in September as Morales, the nation's first Indian president, battled an autonomy movement in the natural gas-rich eastern departments of Santa Cruz, Pando, Beni and Tarija. The movement was triggered by Morales' pledge to redistribute wealth from the eastern departments to the country's poorer highlands.

Some of Latin America's leaders have supported Morales. Venezuelan President Hugo Chavez, long a critic of Bush and the United States, expelled the U.S. ambassador from Caracas in solidarity with Bolivia and recalled his own ambassador from Washington.

In late October, Bolivia's Congress approved an agreement between the government and opposition leaders to hold a referendum on a constitution that would grant more power to the nation's Indian majority, according to the Bolivian Information Agency, or ABI, the state news agency.

To spur the negotiations, ABI reported, Morales agreed to seek only one more term as president.

The agreement followed weeks of negotiations between the government and political opponents, including the governors of the eastern provinces.