HAVANA, Cuba (CNN) -- Many Cubans thought they'd left behind forever the grim, hungry days that were the norm just after the dissolution of the Soviet Union and, with it, the loss of billions of dollars in subsidies for the Communist state. 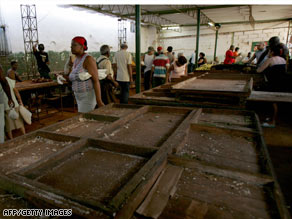 Vendors await the arrival of agricultural products at a green market in Havana, Cuba, on Thursday.

But what government officials used to call euphemistically "the special period" has returned, thanks to recent back-to-back visits of Hurricanes Gustav and Ike, which devastated farm production. Now, years after the economic crisis of the 1990s, Cubans are again facing the specter of hunger.

"There isn't a single province or municipality in Cuba that wasn't affected," said Vice Minister of Agriculture Alcides Lopez.

In response, the government has set price limits and harsh penalties for anyone who breaks them.

The government imposed the price limits just weeks after it raised the price of gasoline by 70 percent, to $5.50 per gallon, which made it more expensive for farmers to get their crops to market.

A cartoon in the state newspaper painted vendors who profit from the food shortage as enemies of the people. But economist and government critic Oscar Espinosa Chepe told CNN that the government shares some of the blame.

"It's a desert," he said, referring to the empty shelves of one market. "There's nothing for sale. The government has adopted fixed prices for farmers at a time when the price of gasoline has gone up."

That means that many of Cuba's most productive farmers -- those who work in part for profit -- can no longer afford to sell their goods, he said.

"Just look at how things are after the hurricane," said one woman who said she'd already been to three other markets looking for food.

"With the hurricanes," she said, "there's nothing -- almost everything's disappeared."

And she was talking about one of the best-stocked markets in Havana. In many other markets, shelves are bare.