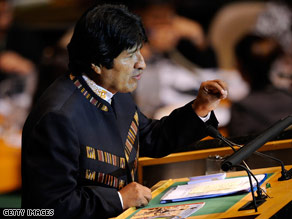 The 48-year-old Morales, in an address to the United Nations General Assembly, described privatization as the cause of the world's financial crisis, and credited his nationalization of Bolivia's petroleum industry as a boon to the nation's economy.

"In 2005, before I was president, the state of Bolivia had only $300 million from hydrocarbons," he said. "Last year, 2007, the Bolivian state -- after the nationalization, after changing the law -- Bolivia received $1,930 million. For a small country with nearly 10 million inhabitants, this allows us to increase the national economy."

Morales, the nation's first indigenous president, cited "a permanent conspiracy" among pro-autonomy, largely white groups in four eastern petroleum-rich areas, or "departments," that oppose his efforts to redistribute some of their wealth to poorer areas of the country.

He noted that he acceded to his critics' demands that he hold a referendum on his popularity and was vindicated, winning it last month with an overwhelming 67 percent of the vote.

The four eastern departments have gone on to hold their own referenda, which Morales rejected as illegal. They also called for autonomy, setting up roadblocks, attacking the national police, abducting federal employees, seizing airports, seeking to interrupt the export of natural gas through pipelines, and taking over state-run television stations and community radio stations.

"When I was a little boy, during the time of military dictatorships, the coups d'etat began when they took the state-run television channels," he said. "History repeats itself. But thanks to the conscience of the Bolivian people, they defeated the civil strike in Bolivia."

Though European and other Latin American countries supported the Bolivian government in the face of the pro-autonomy movement, the United States failed to condemn the acts of "terrorism" that the groups carried out, said Morales, who expelled the U.S. ambassador in response.

Morales said he was not surprised at the U.S. response. He said that, as a member of parliament in 2002, he was accused by the U.S. ambassador of being a narcotrafficker and an assassin.

The rhetoric got worse, he said, with the ambassador calling him an Andean bin Laden and his indigenous peasant supporters "Talibans."

Morales said the United States was so entrenched in Bolivian politics that, when he assumed the presidency in 2006, "We found a CIA office in the palace." In addition, he said, a member of the U.S. military oversaw the shipment of illegal arms to Bolivia and then said they were to be used for training purposes.

Bolivia is not the sole target of U.S. government interference: The United States works against any nations that reject the capitalist model, he said.

"When one person works for equality, for social justice, he is persecuted and conspired against by some groups. By groups not interested in equality of humanity."

He added, "Here, it's the fight between rich and poor, capitalism versus socialism ... capitalism is the worst friend of humanity."

Though there was no immediate response from Washington, U.S. officials have denied Morales' assertions in the past.

All About Evo Morales • Bolivia