Red Cross concerned over use of emblem in Colombian rescue

(CNN) -- The International Committee of the Red Cross expressed its concern Wednesday over what may have been the improper use of its emblem in the daring rescue last month of 15 hostages in Colombia. 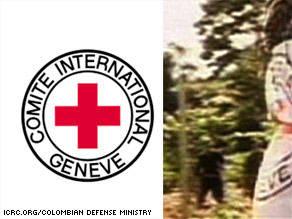 What seems to be part of a red cross is seen on a man involved in the rescue in this official image.

"We are in contact with the Colombian authorities to ask for further clarifications as to exactly what happened," ICRC Deputy Director of Operations Dominik Stillhart said in a written statement.

Video and photographs originally shown to CNN appeared to show one of the hostage rescuers wearing a bib with a red cross on it, and Colombian President Alvaro Uribe admitted July 16 that Colombian military intelligence used a single Red Cross symbol in the rescue mission.

The ICRC statement said video aired on Colombian television earlier this week "reveals that a member of the army team involved was wearing a tabard marked with the Red Cross emblem before the operation had even begun, suggesting intentional misuse."

Watch where bib appeared in video »

"If authenticated, these images would clearly establish an improper use of the Red Cross emblem, which we deplore," Stillhart said.

Defense Minister Juan Manuel Santos blasted the leaking of the video as "an act of disloyalty, possibly corruption or even treason," although he defended the right of the media to publish the material once it had been leaked.

Speaking at a news conference at a military base in San Jose del Guaviare on Tuesday, Santos said the military had launched an investigation into the leak and said that those responsible would be "severely disciplined."

Uribe said in July that the man wearing the bib was a member of the Colombian military intelligence team involved in the rescue who panicked and used the emblem to protect himself.

"This officer, upon confessing his mistake to his superiors, said when the (rescue) helicopter was about to land ... he saw so many guerrillas that he went into a state of angst," Uribe said.

"He feared for his life and put on the Red Cross bib over his jacket."

However, a confidential military source who showed CNN the photographs that included the man wearing the bib said they were taken moments before the mission took off.

The use of the "Red Cross, Red Crescent and Red Crystal Emblems is governed by the Geneva Conventions and their Additional Protocols."

"These emblems may not be used by bodies or persons not entitled to do so under international humanitarian law," the ICRC statement said.

Uribe said in July that as the constitutional head of the armed forces, he takes full political responsibility for what he described as a slip-up. He said he has apologized to ICRC officials.

Previously, the Colombian president and his top generals had categorically denied that international humanitarian symbols were used in the July 2 rescue mission that duped the Revolutionary Armed Forces of Colombia (FARC) rebels into handing over prized hostages including former presidential candidate Ingrid Betancourt, three U.S. military contractors and 11 Colombian police and soldiers.

Learn about some of the freed hostages »

Such a use of the Red Cross emblem could constitute a "war crime" under the Geneva Conventions and international humanitarian law, according to international legal expert Mark Ellis, executive director of the International Bar Association.

Such a move could endanger humanitarian workers in the future, he said.

"If you use the emblem in a deceitful way, generally the conventions say it would be a breach. (Based on the information as explained to me) the way that the images show the Red Cross emblem being used could be distinguished as a war crime," he said in an interview with CNN on July 16.

"Complete and total respect for the Red Cross emblem is essential if the ICRC is to be able to bring assistance and protection to the people worst affected by armed conflicts and other situations of violence," the ICRC's statement said.

"As a neutral and impartial humanitarian organization, the ICRC depends on the trust of all the parties to the conflict to be able to carry out its humanitarian work."