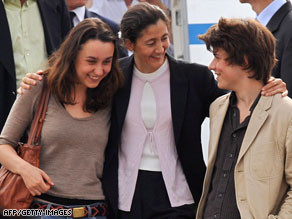 Betancourt, 46, was reunited with her daughter, Melanie Delloye, and son, Lorenzo Delloye-Betancourt, a day after she and 14 others were rescued from leftist rebels in the jungles of Colombia.

The three tearfully clung together on the steps of a plane that had just arrived from France at a Colombian airport, hugging and kissing each other fervently before disappearing inside the plane.

Betancourt told reporters at the airport that her children looked "beautiful" and she was proud of them.

"They look so different, but they look so much the same at the same time," Betancourt said.

Betancourt's son, Lorenzo, said it was hard to describe his feelings when he found out his mother had been freed.

"I can't give it a name," he said. "It was too much happiness to know that after six years that I had not been able to see my mother, to know that I was going to be able to hold her, tell her that I love her."

Betancourt and both children called for action to free other hostages still held by the leftist Revolutionary Armed Forces of Colombia, known as FARC for its initials in Spanish.

"We need to keep fighting so this moment [of reunion] will come for everyone," Melanie said.

The FARC, which has battled Colombia's government and right-wing paramilitary groups for years, is believed to hold roughly 750 prisoners in the nation's remote jungles.

The children, now adults, were accompanied on the plane by French Foreign Minister Bernard Kouchner.

"The incredible force behind Betancourt's family is going to serve to free other people in captivity," he said.

Hours after the military operation that freed 15 hostages, Colombian President Alvaro Uribe urged peace by calling on FARC to release all hostages.

The Colombian military infiltrated the group and deceived its members into giving up the hostages, including Betancourt, according to the country's defense ministry.

Uribe called the daring operation "an unbelievable military achievement and an honor to humanity." No shots were fired in the operation.

The security forces who deceived the rebels "are entering the page of the heroes of humanity," Uribe said.

Along with Betancourt, three American contractors and 11 Colombian police and military personnel were rescued. The Americans -- Keith Stansell, Marc Gonsalves and Thomas Howes -- arrived in the United States Wednesday night. The Colombians were with their families and friends in Bogota.

Biographies: Who are the hostages? »

Betancourt was abducted February 23, 2002, after venturing into rebel territory in the south while campaigning for the Colombian presidency.

Betancourt described later Thursday aspects of her captivity, saying that the hostages lived with death daily, both in the sense that the FARC members could kill them, and in the desire to cut short one's captivity. "The temptation of suicide ... was constant in all of us," she said.

She has called the rescue operation "a miracle."

She recalled how her day began on Wednesday, waking up at 4:30 a.m. and saying the rosary before being told by her guards that she and the other hostages were to be transferred to another location, where their detention was to continue.

"My heart broke because I did not want another transfer, another time, in captivity," she said.

But her guard, a woman, was unmoved and ordered Betancourt to cross a river to the pickup spot -- "very harsh, move, hurry up fast, as always," she said.

Soon, two white helicopters approached and several men approached the FARC commanders who were overseeing their transfer, she said.

"They spoke with Commander Enrique and Cesar," she said of her captors. As she looked closer, she saw that the men from the helicopter were wearing shirts emblazoned with the likeness of Che Guevara, the Argentine hero of the Cuban revolution. "I thought, this is FARC," she said.

"Suddenly I saw the commander who, during four years, had been at the head of our team, who so many times was so cruel and humiliated me, and I saw him on the floor naked with bound eyes."

It was only then that the reality of liberation hit home.

"The chief of operations said, 'We are the national army, and you are all free,' and the helicopter almost fell because we started jumping, we screamed, we cried, we hugged. We couldn't believe it."

Watch Betancourt describe her feelings during the rescue »

Betancourt described the operation as "a miracle" and "a moment of pride" in Colombia.

Betancourt added that she hopes that FARC commanders would not punish the guards who were fooled. It was not their fault, she said; the operation was too perfect for them to detect the deceit.

Asked if she still wants to be president, Betancourt said, "If I continue with the dream to serve Colombia, yes, from the presidency, only God knows. At this moment, I just want to feel like another soldier, another soldier for Colombia, in the service of the fatherland."

It is estimated that FARC, which has fought a long and complicated conflict with the Colombian government and right-wing paramilitary groups, still holds more than 700 hostages. The organization defends its taking of captives as a legitimate act of war.

The U.S. government considers the group a terrorist organization and refused to negotiate with it while publicly urging the group to release the three Americans also freed in Wednesday's rescue operation.

Eleven FARC leaders, including the two commanders taken in Wednesday's operation -- Gerardo Antonio Aguilar Ramirez, known as "Cesar," and Alexander Farfan Suarez, known as "Gafas"-- have been federally indicted in Washington on charges of supporting a foreign terrorist organization and hostage taking.

The two commanders appeared at a news conference in Colombia later Thursday with Gen. Mario Montoya. Gafas appeared to have a black eye.

Venezuelan President Hugo Chavez, who brokered earlier this year the release of six FARC hostages, characterized on Thursday the FARC practice of hostage-taking as "an intolerable behavior."

Although the leftist president had once called for diplomatic recognition of FARC as legitimate combatants, he has recently changed his stance, saying they should lay down their arms.

A Colombian military strike earlier this year on a FARC camp inside Ecuador led to the seizure of computers that held a wealth of intelligence about the group, including alleged links between Chavez and the rebels. The Venezuelan president denies the accusation.