(CNN) -- Somalia's transitional president has resigned amid a power struggle with the African nation's prime minister and parliament, sources told CNN on Monday. 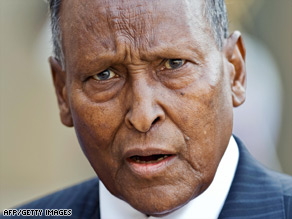 Abdullahi Yusuf Ahmed tried to fire his PM this month but later lost a confidence vote.

Ahmed's resignation is the latest turn in the political crisis in Somalia, which is already struggling with an Islamist revolt, a refugee crisis and rampant lawlessness that has fueled a wave of piracy off the Horn of Africa.

Somalia has been without an effective central government since 1991. The U.N.-backed transitional government has the support of Ethiopian troops that ousted an Islamist government at the end of 2006, but it controls little of the country outside the southwestern city of Baidoa.

Ahmed attempted to fire his prime minister, Nur Hassan Hussein, earlier this month for being ineffective. But Hussein said the president did not have the power to fire him, and the vast majority of members of parliament backed Hussein in a vote of confidence.

Kenya -- a major player in international efforts to stabilize Somalia -- warned that the government crisis endangered peace efforts and singled out Ahmed over his attempt to sack Hassan.