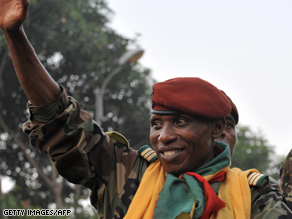 Capt. Moussa Dadis Camara declared himself president of the National Council for Democracy, which he called a transitional body that will oversee the country's return to democracy.

In effect, that would make Camara president of Guinea, which was thrown into turmoil Monday after the death of President Lansana Conte.

"For the time being the situation is calm and negotiations are under way," Diallo said. "There is no traffic. Everyone is staying inside their homes."

Camara, previously the spokesman for the National Council for Democracy, suspended the government, constitution, political parties and trade unions, Diallo said from Conakry.

The newly formed government, made up of 26 military personnel and six civilians, is negotiating a power-sharing deal that would reflect its ethnic make-up, Diallo said.

But some in the military may not support the new leadership, he said.

International institutions, including the African Union, have condemned the coup.

Guinea, in western Africa bordering the Atlantic Ocean, has had two presidents since gaining independence from France in 1958.

Conte came to power in 1984, when the military seized control of the government after the death of the first president, Sekou Toure.

The country did not hold democratic elections until 1993, when Conte was elected president. He was re-elected in 1998 and 2003 amid allegations of electoral irregularities.

A third nationwide strike in early 2007 sparked violent protests that resulted in two weeks of martial law. To appease the unions and end the unrest, the Factbook says, Conte named a new prime minister in March 2007.

Guinea is one of the poorest countries in the world, despite its mineral wealth, according to the British charity Plan UK. The country hosts large refugee populations from neighboring Liberia and Ivory Coast.

All About Guinea • African Union