(CNN) -- "Planet in Peril: Battle Lines" traveled to a place off the coast of South Africa known as "shark alley," one of the best places in the world to see great white sharks. 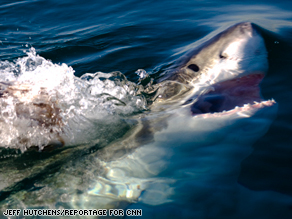 CNN traveled to "shark alley" off the coast of South Africa, one of the best places in the world to see great whites.

Shark tourism has become big business, bringing in more than $30 million every year to South Africa.

The experience is a major draw for tourists, but it's controversial. Local surfers and swimmers say it is changing shark behavior and may be causing more attacks.

Anderson Cooper swam with these great white sharks -- without a cage -- as part of his report for "Planet in Peril: Battle Lines."

He talked about the experience Thursday morning with "American Morning" anchors John Roberts and Kiran Chetry.

Anderson Cooper: We went diving with great white sharks. There is a big controversy over whether or not these cage tour operators are actually changing sharks' behavior. They chum the water to attract the sharks, tourists get in the water, and so we had the opportunity to go cage diving and also to go free diving with the sharks, which is a pretty rare thing. There's not many people on the planet who actually do it, probably for very smart reasons.

You'll see that tonight on "Planet in Peril." Actually, swimming with great white sharks without a cage, which is among the most remarkable experiences of my life, I've got to say.

Kiran Chetry: What do they call that, a free dive with sharks?

Cooper: Yeah, we went free diving with the sharks. The water is chummed with blood, so it's bloody water, and I was just about to get in, and I turned to the guy and said, "Do you have any recommendations?'" And he said, "Project confidence."

See how great white sharks are lured to the surface »

Chetry: There you go. Thanks.

John Roberts: He also told you not to breathe, right, because they don't like the noise of the bubbles?

Roberts: So, meantime you're down there hyperventilating.

Cooper: It's all well and good to say "OK, don't take a breath," but your heart is beating so fast when a huge great white shark is close to you, that you can't hold your breath. So I was actually breathing more and causing more air bubbles. And the sharks open up their mouths and extend their jaws when they're nervous, and that makes me very nervous.

Roberts: You're reminded of when Roy Scheider [in the movie "Jaws"] said, "We're gonna need a bigger boat."