MOMBASA, Kenya (CNN) -- The trial of eight Somali men accused of piracy in the attempted hijacking of a Danish freighter has been put off until January after a preliminary session Thursday. 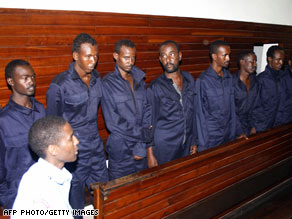 Some of the suspects facing trial are shown last month being arraigned in a Mombasa, Kenya, courtroom.

The men were captured by a British frigate in the Gulf of Aden in November and brought to Kenya for trial. But their lawyer told CNN that his clients were fishermen and that Yemen, rather than Kenya, should have jurisdiction over them.

If convicted, the men face a maximum sentence of life in prison. After an initial session Thursday, the much-anticipated trial is scheduled to resume January 14.

Senior State Counselor Vincent Monda said prosecutors need to bring in witnesses from the British navy, Yemeni victims and seamen from the Danish cargo ship MV Powerful, which the suspects are charged with trying to commandeer. He said the need to line up international witnesses and the complexity of the case required more time for preparation.

But Jared Magolo, the accused pirates' attorney, said the prisoners were being mistreated and argued unsuccessfully that proceedings should go ahead.

The eight Somalis were led off a prison bus in a double line, handcuffed to each other in pairs. They were dressed in blue coveralls and red sandals to distinguish them from the other suspects being brought to court. One sarcastically raised a salute to his guards as he was led into the courthouse.

All eight were delivered to Kenya after their capture by the British frigate HMS Cumberland in the Gulf of Aden. Helicopters from the Cumberland and the Russian frigate Neustrashimy helped thwart the attempted hijacking of the Danish ship on November 11.

Magolo told CNN that his clients were fishermen. Since they were caught off the coast of Yemen, he said they would challenge the jurisdiction of Kenyan courts.

"They are fishermen who were fishing in Yemeni waters," Magolo said. "The British vessel attacked them and they lost their fish."

International law gives maritime powers wide latitude as to where pirates should be tried.

"It is very important that we prove that this all happened in international waters," Monda said.

But Andrew Mwangura, the head of the Kenya Seafarers Association, said the men should have been handed over to Yemeni authorities.

"You apply the laws of the nationality of that ship and the area that the ship was when the incident happens," he said.

An international fleet has been patrolling the waters off the Horn of Africa for months in an effort to clamp down on the spread of hijackings from largely lawless Somalia. More than 40 vessels have been taken and held for ransom in 2008, according to the Malaysia-based International Maritime Bureau.

But Mwangura said the clampdown was unlikely to work until the "root cause" of the problem -- the poverty of chaotic Somalia, which has had no effective government since 1991 -- was addressed.

"The young men are poor," he said. "The real pirates are the sharks outside of Somalia, and these are the ones that take big money." While naval efforts to contain the problem are useful, more should be done on land to ease the problems, he said.

"The presence is good, but we should do something diplomatically, politically," Mwangura said. "Talk to the people, the common people."