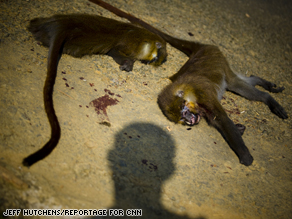 Deep in a remote region of Cameroon, we are following two hunters looking for bush meat -- forest animals they can kill to feed their families. They've spent hours in the forest already, but all the traps they've set are empty. They will have to push deeper into the forest and they may be hunting for days.

Last year, rising food prices touched off riots around the world, killing dozens of people. Unable to afford basic supplies, communities in Central Africa are increasingly turning to the forests for food. In doing so, hunters expose themselves to hidden dangers - microscopic pathogens living in the blood of forest animals.

Most of the viruses are harmless, but some are potentially deadly when passed to humans. Scientists point out there's nothing new about these viruses. What is new is the frequency of people's contact with them and how easily they can now be spread around the world.

"Individuals have been infected with these viruses forever," Wolfe said. "What's changed, though, is in the past you had smaller human populations; viruses would infect them and go extinct. Viruses actually need population density as fuel."

Wolfe works mostly in the forests of Cameroon tracking these viruses that can jump from animals to humans - what are called zoonotic viruses.

The most prolific and deadly zoonotic is HIV, the virus that causes AIDS. In 1999, scientists at the University of Alabama at Birmingham traced the origins of HIV back to a subspecies of chimpanzee. Scientists think that the virus might have jumped to humans when the blood of an infected chimpanzee came in contact with the blood of a bush meat hunter during the killing or butchering of the animal.

It took decades, but that simple, seemingly insignificant transmission set off a global epidemic, or pandemic, that so far has killed or infected tens of millions of people. Scientists think HIV probably crossed into humans as far back as the early 1900s, but it wasn't until air travel became common that the virus spread, and AIDS became a global epidemic in the 1980s.

"We're now so profoundly interconnected that it will be the case things will enter into the human population and will spread globally," said Wolfe.

The centerpiece of Wolfe's work is trying to stop the next pandemic before it starts. He's using a recent $11 million grant from Google and the Skoll Foundation to continue something called the Global Viral Forecasting Initiative or GVFI. It's a kind of early-warning system to track the transmission of viruses in virus hot spots around the world. In addition to Cameroon, Wolfe has teams in the Democratic Republic of Congo, China, Malaysia, Madagascar and Laos.
iReport.com: What little things can you do to save the planet?

Wolfe likens his work to the way an intelligence service tracks threats made by potential terrorists. His teams cross-reference the different viruses jumping over into humans - what he calls the viral chatter. By doing so, they can identify previously unknown viruses and perhaps stop them before they spread.

One zoonotic virus that Wolfe and his team are paying particularly close attention to is called monkeypox. It's a virus that intermittently flares up in Central African countries; last year it killed more than 20 people in the Democratic Republic of the Congo.

The name monkeypox is a misnomer -- scientists don't think it comes from primates and think it's more likely it comes from forest rodents. The virus manifests itself much like chickenpox, with sores that cover the body. Fatigue and body aches are common symptoms. But because doctors can't be sure of its origins, treating -- much less curing it -- is difficult. Most of the patients are given general antibiotics and the virus is allowed to run its course.

CNN producers have a monkeypox scare »

It's unlikely the current viral strain of monkeypox could become a pandemic, because it loses strength as it passes from person to person. But it spread to the United States in 2003 when some African rodents were imported as pets. Wolfe is most intrigued by monkeypox because its origins are unknown. In fact, monkeypox is one of the many viruses we know very little about.

"By documenting them, we're potentially getting to a place where we can prevent pandemics instead of waiting for something like AIDS to happen and spread globally. To actually catch it earlier could potentially save millions of lives," said Wolfe.

For hunters, like the two men the "Planet in Peril" crew has been following, viruses and science seem remote things to be concerned about. These men and an increasing number of people like them must hunt the forests simply to feed their families.

But for the rest of us, with population and food pressures increasing and deadly zoonotic viruses lurking in the forest, what the hunters are doing now has the potential to impact us all.

Charlie Moore contributed to this report

All About HIV and AIDS • Central Africa • Contagious and Infectious Diseases