No way to stop us, pirate leader says

NAIROBI, Kenya (CNN) -- Somalis are so desperate to survive that attacks on merchant shipping in the Gulf of Aden and the Indian Ocean will not stop, a pirate leader promises. 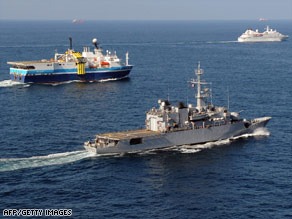 A French warship keeps guard over commerical vessels in the Gulf of Aden last week.

"The pirates are living between life and death," said the pirate leader, identified by only one name, Boyah. "Who can stop them? Americans and British all put together cannot do anything."

The interview with the pirate was conducted in late August by journalists employed by the Somali news organization Garowe Online. The complete interview was provided to CNN last week and provides a glimpse of why piracy has been so hard to control in the region.

Recorded on grainy video, the interview took place in the Somali port city of Eyl, now a center of pirate operations. Eyl is on the east coast of Somalia in the autonomous territory of Puntland. It is a largely lawless zone, considered extremely dangerous for Westerners to enter.

The Puntland government said two unidentified Western journalists were taken hostage Wednesday as they attempted to report on pirate activity.

Watch why fishermen turned to piracy »

"We went into the deep ocean and hijacked the unarmed cargo ships," Boyah said.

"For the past three years, we have not operated near the Somali coast. We have operated at least 80 miles [out], in international waters."

Over the past year, the number of pirate attacks has increased dramatically. The International Maritime Bureau cites more than 90 pirate attacks off East Africa so far in 2008. When attacks are successful, the hijacked ships are taken to Somali waters, where the ships and crew are held until a ransom is paid.

Ships recently captured include a massive Saudi supertanker laden with crude oil valued at more than $100 million and a freighter carrying Russian-built tanks.

The hijackings have been profitable. Kenya's foreign minister, Moses Wetangula, estimates the pirates have been paid more than $150 million during the past year. One pirate gang wants $2 million dollars to release a Yemeni freighter and crew seized last week.

Facing increasing disruptions through one of the busiest sea lanes in the world, several countries have sent warships to patrol the area. There have been reports of skirmishes between pirates and naval forces, but the military presence does not concern pirate leader Boyah. He boasts the pirates literally sail in a vast ocean beneath the radar of the warships.

Watch how piracy thrives off Somalia »

"No ship has the capability to see everything," he said. "A ship can see 80 miles or so [on radar]. It cannot see us at all. No one can do anything about it."

Boyah said it is unlikely the Puntland regional government would ever crack down on piracy because government officials are involved in financing the piracy and collect a cut of the ransoms.

"They motivate us. It's their money and their weapons," Boyah said. "Thirty percent belongs to them."

The Puntland foreign minister, Ali Abdi Aware, denied government involvement with the pirates, including taking bribes. The minister cited the arrest of six pirates earlier this year as evidence it is acting to stop piracy.

Pirate Boyah said he is unimpressed with the arrests by Puntland authorities.

While Boyah may have been outspoken about the government's ineffectiveness, he did not allow interviewers to show his face, an indication that even in this lawless country, pirates still have some fear.