MOGADISHU, Somalia (CNN) -- Ethiopian troops have not yet begun to withdraw from key positions in the capital of Somalia two days after they were supposed to do so under a peace agreement designed to end years of conflict. 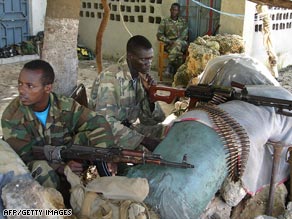 Ethiopian troops are yet to leave the Somlai capital despite a peace agreement.

The Ethiopians had agreed to withdraw from some bases by Friday under an agreement signed last month by the Somali transitional government and a rebel faction known as the Alliance for the Re-Liberation of Somalia.

Ethiopia invaded Somalia two years ago to expel Islamic forces who had conquered Mogadishu. Under the deal signed October 26, a cease-fire between the transitional government and the ARS went into effect November 5. The Ethiopians were to withdraw from from key positions in the capital on November 21, and leave the country entirely early in 2009.

Sheikh Sharif Sheikh Ahmed, a moderate leader of the rebel ARS, told the local radio station Shabelle Saturday that the Ethiopian troops would pull out on schedule.

The fighting started when armed insurgent fighters attacked the house of a local commissioner in Mogadishu's Wadajir district, sparking heavy fighting between the government troops guarding the house and the insurgents.

"I saw 11 men wearing red turbans on the heads dead on the ground," local resident Mohamed Haji Ali told CNN by phone from a house near where the clashes took place. Other residents provided a similar death toll.

The commissioner whose house was attacked, Ahmed Da'd, said that his soldiers killed 17 insurgents. He displayed what he said were some of the dead insurgents for the media.

It is not clear what will happen if the Ethiopian troops remain in Mogadishu despite the October 26 peace deal. Under that agreement, government and opposition members will form a 10,000-member joint police force to keep order, along with the African Union peacekeeping mission now in place and a U.N. force to be deployed later. Both sides will work toward establishing a unity government in Somalia, which has been riven by 17 years of strife since the collapse of its last fully functional government.

Ethiopia invaded Somalia in December 2006 to install the transitional government in Mogadishu after a decade and a half of near-anarchy. The invasion had the blessing of the United States, which accused the Islamic Courts Union -- which captured Mogadishu earlier that year -- of harboring fugitives from al Qaeda. The Islamists responded with a guerrilla campaign against government and Ethiopian troops.

Efforts to replace the Ethiopians with an African Union-led peacekeeping mission faltered as the violence worsened, and heavy fighting in Mogadishu and other cities drove hundreds of thousands from their homes. The lawlessness also spilled on to the seas off the Horn of Africa, where international vessels are routinely hijacked by suspected Somali pirates who demand large ransoms.