Q and A: Pirates of East Africa

(CNN) -- In their most audacious act to date, pirates this week captured a huge supertanker carrying up to $100 million worth of oil off the east coast of Africa. 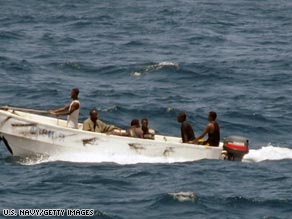 Pirate activity has increased dramatically in the Gulf of Aden region.

The attack on the Saudi-owned Sirius Star marks an escalation in stakes as shipping companies run the gauntlet along key trade routes.

It follows the September capture of the MV Faina, a Ukrainian vessel loaded with weapons and tanks.

Why are there so many pirates in this region in particular?

The Horn of Africa and the Gulf of Aden are the most dangerous waters on the planet. The International Maritime Board reports over 80 attacks and over 30 successful hijackings in the region since the beginning of 2008.

There are other pirate hot spots, like the Straits of Malacca and the Nigerian coastline, but this region tops them all.

Why is it so bad?

There is a simple answer: Somalia. Since the early 1990s Somalia has not had an effective government and this quintessential "failed state" is the perfect environment for organized crime to flourish.

The pirates operate easily because Somalia's Transitional Federal Government has limited capacity to take them on. And though there are warships patrolling the region, the area of operation for the pirates now stretches over a million square miles.

To see a worldwide tracker of piracy attacks, go here.

When did piracy first emerge as a feature of criminal activity in this region?

Those who have been tracking pirate activity for sometime say it started in the 1980s in Somalia. Originally the pirates claimed they were aiming to stop the rampant illegal fishing and dumping that continues to this day off the Somali coast.

But piracy accelerated after the fall of the Somali government in the early 1990s and began to flourish after shipping companies started paying ransoms, initially tens of thousands of dollars, hundreds of thousands if not millions.

Some say companies are simply making the problem worse by paying the pirates.

Who are the pirates?

The pirates tend to be young Somalis from poor communities. They are a ragged looking bunch, but that doesn't mean that they are inexperienced.

The majority of the attacks have occurred off the Puntland region of Somalia that borders the Gulf of Aden in the narrow stretch of water between Somalia and Yemen. The narrow shipping channel has been ideal for pirates.

But recently coalition warships have set up a security cordon in that area and this might explain why pirates struck the massive Sirius Star so far out of their normal hunting grounds.

How heavily armed are they?

These are heavy weapons to carry on small skiffs, but they pale in comparison to the weaponry on the warships in the region, which makes their success all the more astounding.

What type of shipping do they tend to target?

Their targets are varied. They have taken chemical tankers and fishing vessels, small cargo ships and bulk carriers. They have even hijacked luxury yachts.

How significant is the fact that they have seized a tanker? Are they becoming more daring?

It is very significant as it shows how effective their operations have become. A few years ago pirates were only attempting to hijack fishing vessels and smaller cargo ships.

With the Sirius Star they have managed to take on something that is over 300,000 metric tons -- that's three times the size of an aircraft carrier.

More significant is where they hijacked the vessel. They grabbed it 720 km (450 miles) southeast of Mombasa, Kenya. They have expanded their operations far outside of their usual hot spots and could threaten a far greater region.

What is being done about them?

Amd the chaos of civil war, Somalia's U.N.-backed transitional government has little power to wield in the country on the piracy or on any other issue as it struggles against infighting and pressure from Islamic parties and rebel groups.

The government has repeatedly appealed for help from the international community to fight piracy.

And while the U.S. Navy and others have been unwilling to use force on ships under hostage, Somalia's Prime Minister Nur Hassan Hussein wants to be more aggressive.

"When pirates are using force to hijack the boats and the ship," he said, "I think the only way to prevent or at least to save the hijacked ships and the crew is to use the force."

Several countries have begun operating patrols in the Gulf of Aden. India claimed Wednesday one of its frigates had been in an exchange of fire with a suspected pirate "mother ship," which it left ablaze.