(CNN) -- The survival of several hundred rare gorillas is threatened by rebel fighters who have taken over the animals' sanctuary, a spokeswoman for the Virunga National Park said Tuesday. 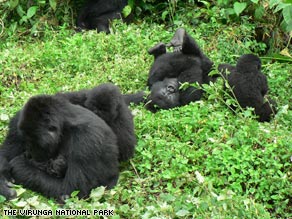 The gorilla sector of the park "has been swallowed up in this conflict," said Samantha Newport, communications director for the refuge.

She fears for the animals' safety, not least because mountain gorillas do not always flee the sound of gunfire and mortars, she said.

"There are documented cases of the gorillas getting caught in the crossfire and getting killed," she said. "It's the chaos of war and they are right in the middle of it."

That leaves the situation "extremely precarious" for the critically endangered species, she said.

About 200 of the world's 700 known mountain gorillas lived in the park when rebel leader Laurent Nkunda's men took control of the gorilla section last year, Newport said. At least nine gorillas are known to have been killed in Virunga National Park last year.

The seizure forced hundreds of rangers who normally monitor the gorillas to flee.

The rangers "track and monitor the mountain gorillas," freeing them from snares and intervening medically in life-threatening situations, Newport said. "It's really important to keep track on a daily basis."

That has been impossible for weeks, she said. "There has been a complete lack of knowledge about the gorillas for some time. Nkunda's forces control about 50 percent of the park, including the gorilla sector."

The gorilla section of the park lies in a strategically important area near the borders of Rwanda and Uganda, she explained.

Fighting between Congolese government soldiers and rebels led by Nkunda has displaced more than 250,000 people. That's in addition to roughly 800,000 who already had been driven from their homes, according to the United Nations.

On Sunday, even as there was fighting in North Kivu province, Nkunda met with Olusegun Obasanjo, the U.N. special envoy for the area.

"Laurent Nkunda engaged on two things in my presence: the respect of the ceasefire on the one hand and on the other, the maintenance of humanitarian corridors in order to give unconditional access to assist vulnerable populations," Obasanjo said following the meeting.

But Obasanjo said nobody could say for certain what Nkunda wanted to gain from his offensive.