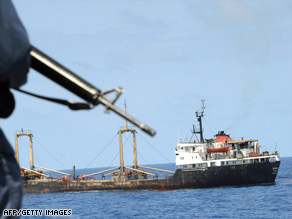 Somalia, which has had no functioning government since 1991, is the world's top piracy hotspot.

Also a Russian patrol ship was able to thwart a hijack attempt on a Saudi Arabian vessel, a spokesman said Sunday.

Among the crew members, five are South Korean and 18 are from the Philippines, the ministry said.

"It was not yet learned who the hijackers are and whether the crewmen are safe," the ministry official told Yonhap.

The Gulf of Aden, which connects the Red Sea and the Arabian Sea, has become a treacherous stretch for ships, particularly along Somalia's coast.

According to Noel Choong of the International Maritime Bureau, which tracks piracy attacks, there have been more than 84 attacks and 33 successful hijackings off Somalia's coast this year.

The hijacking came as the Korean government is considering sending a warship to join those from some other countries to combat piracy in the area.

Meanwhile, a Russian naval spokesman confirmed reports that a Russian patrol ship thwarted the attempted seizure of a Saudi Arabian ship in the Gulf of Aden.

All About Somalia • Gulf of Aden