(CNN) -- The United Nations' refugee agency said Tuesday that more Africans have fled poverty and conflict on the continent during the first 10 months of this year than in all of 2007. 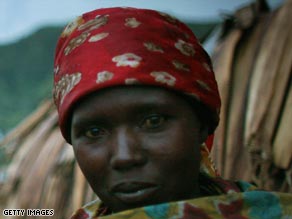 A woman who has been displaced by the current fighting in the Congo.

The bulk of the more than 96,000 African refugees headed to Yemen and Italy, according to the U.N. High Commissioner for Refugees office.

The rest sought refuge in Malta, Greece, Spain and the Canary Islands, the agency said.

Last weekend, at least 60 refugees died en route to Yemen, a frequent destination for Somali and Ethiopian refugees, according to Doctors Without Borders, known by its French acronym MSF.

UNHCR said most of those who died were forced overboard in deep water off Yemen's coast by smugglers who demanded more money than the $100 they paid for the journey.

"Those who did not or could not pay extra were severely beaten by the smugglers," UNHCR said in a news release Tuesday. "Up to 40 -- mainly Ethiopians -- [were] thrown overboard despite their pleas for mercy."

Andreas Koutepas, MSF's field coordinator in southern Yemen, said such a high number of refugee deaths in a short period of time "is not usual at all."

"For the whole of September until now, we've had 27 dead and now suddenly we reach this number," Koutepas told CNN from MSF's base in Ahwar, Yemen.

"We are quite shocked here."

About 30,000 African refugees arrived on boats on Italy's shores during the first 10 months of this year compared with 19,900 refugees last year, according to UNHCR.

In Malta, an estimated 2,600 boat people arrived in the first nine months of this year from North Africa, compared with 1,800 last year, UNHCR said..

The agency said that from January to October this year, 509 of those attempting to make the journey to Italy and Malta died, compared with last year's death toll of 471.

More than 38,000 people have made the perilous journey across the Gulf of Aden from Somalia to Yemen during the first 10 months of this year, a "considerable increase from the 29,500 who made the same journey during the whole of last year," UNHCR said Tuesday.

However, the death toll on that route has remained lower so far this year: more than 600 have died or disappeared en route to Yemen compared to 1,400 killed last year.

In late September, at least 52 Somalis died when the boat smuggling them across the Gulf of Aden to Yemen broke down, and they were left adrift with no food or water for 18 days, according to the U.N.

Many are fleeing the war in Somalia, but Koutepas of MSF told CNN on Monday that he has noticed a recent increase in the number of refugees from Ethiopia.

Yemen is a common destination for Somalis fleeing economic hardship and war because of its proximity. It is also an attractive location because Somalis receive automatic refugee status in the fellow Muslim country.

New smuggling routes, including some based out of Djibouti -- which lies north of Somalia and is much closer to Yemen -- have also led to the increase in refugees, according to the UNHCR.

But according to the Yemen Post, Yemen is just a stopping point for most of the refugees, who then travel on to the wealthier Persian Gulf states or Europe and the United States.

As part of a $19 million operation, UNHCR operates shelters and reception centers for the refugees in Yemen and has increased its efforts to discourage people from making the illegal crossing to Yemen. It has also sponsored training programs for coast guard personnel and other officials.

MSF said the plight of the refugees has been overshadowed by the dozens of pirate attacks off Somalia's coast that have grabbed international headlines in recent months.

"A lot of attention has been paid lately to tackling the issue of piracy in the waters off the Horn of Africa," said MSF Yemen mission leader Francis Coteur. "Unfortunately, little attention is paid to the drama of the refugees crossing the same waters in horrific conditions. Much more needs to be done to address this issue."