(CNN) -- Power-sharing talks in Zimbabwe have stalled, with the government and main opposition parties unable to agree on the distribution of ministries. 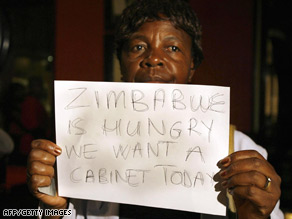 A women holds a sign inside a Harare hotel where power-sharing talks took place Thursday.

Just one day earlier, there were reports that President Robert Mugabe's ruling ZANU-PF party and the opposition Movement for Democratic Change (MDC) were close to reaching an agreement. But that fell apart Thursday.

"We've reached a deadlock on the issue of allocating ministries, therefore we've referred the issue to the facilitator hoping that he finds creative ways of unlocking that deadlock," said MDC spokesman, Nelson Chamisa. "We are hoping that tomorrow the process will continue to try and find a resolution to the outstanding issues."

Mugabe acknowledged that the negotiations have stalled.

"We are hopeful for a breakthrough," he said. "The MDC has their position, and we have ours.

"What we need is a compromise on both sides."

It was reported Wednesday that the ZANU-PF party would oversee the Justice and Legal Affairs Ministry, while the MDC would control the Finance Ministry.

Mugabe sounded confident at the conclusion of Wednesday's negotiations, saying: "We finish tomorrow."

"The proceedings have been going on quite circuitously, but we have not concluded," he said.

Both parties said they would consider the deal overnight.

However, MDC spokesman Chamisa said Thursday that the two sides were deadlocked.

"There has been some movement, but not enough to seal the deal," he said.

It also appeared that more ministries remained on the table than had been indicated Wednesday.

"What we seek is to achieve an equal distribution of the key ministries and responsibilities for the sake of giving the deal a chance," Chamisa said. "It is not on just Finance. They range up to 10: Justice, Information, Defense."

The allocation of government ministries had emerged as the latest hurdle in efforts to sort out the power-sharing deal signed by Mugabe and Tsvangirai on September 15.

The two sides were sorting out the distribution of Cabinet posts last Saturday, when the state-run newspaper published what it said was the official list. That list gave key government ministries to the ZANU-PF, including Defense, Home Affairs, Foreign Affairs and Justice and Legal Affairs.

The MDC said it had not agreed to the selections, but a ZANU-PF spokesman said all parties had given their approval.

Former South African President Thabo Mbeki, who mediated talks to reach the power-sharing deal, arrived in Zimbabwe on Monday to participate in the negotiations.

Media reports Wednesday had suggested the talks were stalled because Mugabe wants to shield his generals -- accused of election violence earlier this year -- from prosecution.

Giving ZANU-PF control of the Justice Ministry would ensure no generals are tried, and the MDC has assured Mugabe they will not go after those allegedly responsible for the violence, according to another CNN source.

Of the other ministries, ZANU-PF was fighting hardest to retain finance, sources told CNN.

They said the party fears that if the MDC controls that ministry, it could audit how money has been spent by Mugabe's government.

It is widely believed that the government misappropriated funds and used the public purse for itself, enriching party loyalists with government contracts and neglecting to develop the economy, which has all but collapsed.

ZANU-PF would let go of finance only if the MDC promised not to investigate how government money was used in the past, the sources said.

The contention around the home affairs portfolio is more complex. Mugabe had suggested that ZANU-PF and MDC share that ministry, with each party having control for six months.

For years, the home affairs portfolio has been under the control of a key Mugabe ally, a ZANU-PF faction called ZAPU that has helped Mugabe retain influence in Matabeleland, an area where the president is hated.

Mugabe fears giving home affairs to the MDC will alienate ZAPU members, causing them to join the opposition and further weakening the ruling party.

Home Affairs also controls the voter rolls, which Mugabe's government has been accused of manipulating.

The recent disputes threatened the power-sharing agreement, which was to end months of turmoil and violence after the country's presidential election in March.

Tsvangirai garnered the most votes but did not win enough to avoid a runoff with Mugabe, who has ruled the country since independence from Britain in 1980.

The MDC leader withdrew days before the June 27 runoff, alleging that Mugabe's supporters had waged a campaign of violence and intimidation against opposition supporters.