WASHINGTON (CNN) -- The U.S. attorney general is trying to prevent immigration authorities from sending a Muslim woman to her home country, where she was a victim of female genital mutilation. 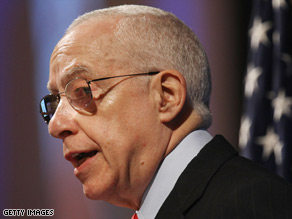 In a stinging order overriding federal immigration courts, Mukasey blasted a decision that said a 28-year-old citizen and native of Mali should be expelled "because her genitalia already had been mutilated [so] she had no basis to fear future persecution if returned to her home country."

Calling the rationale "flawed," Mukasey sent the case back to the Board of Immigration Appeals with orders to reconsider.

The woman, a native of Mali, begged the court not to send her back to her Bambara tribe.

The 28-year-old said if she returned and had a daughter, the child also would be subject to mutilation. The woman also said she faced forced marriage if she had to go home.

Mukasey cited what he concluded were two significant factual errors in the court's rejection of her appeal.

"Female genital mutilation is not necessarily a one-time event," Mukasey said. He noted that the board in a previous case had granted asylum in to one woman whose "vaginal opening was sewn shut approximately five times after being opened to allow for sexual intercourse and child birth."

He also concluded that the Board of Immigration Appeals was wrong to assume that the woman "must fear persecution in exactly the same form [namely, repeat female genital mutilation] to qualify for relief."

Mukasey had been urged to look into the matter by angered members of Congress in the wake of the January decision.

"This recent action taken by the Board of Immigration Appeals is a step backward for the rights of women worldwide," declared Rep. John Conyers, D-Michigan, in a January letter.

"Female genital mutilation is a gross violation of a woman's human rights and has traditionally been grounds for the granting of an asylum claim," Rep. Zoe Lofgren, D-California, said in the letter.

Female genital mutilation is common in parts of Africa, Asia and in some Arab countries, according to the United Nations. The operation is viewed by some ethnic groups as a means to control a woman's sexuality and is sometimes a prerequisite for marriage or the right to inherit.

The procedure can cause tissue injury, severe infection and fever, among other complications. The U.N. has recorded cases in which hemorrhaging and infection lead to death.

All About Michael Mukasey • Mali • Immigration