WASHINGTON (CNN) -- Libya will pay hundreds of millions of dollars to victims of terrorist attacks involving Americans in an agreement signed and finalized Thursday, the U.S. State Department said. 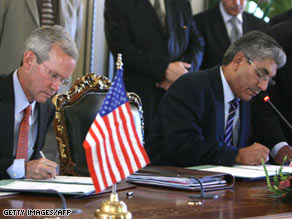 Assistant Secretary of State David Welch signed the deal in Tripoli, Libya, on Thursday. If implemented, the deal will end Libya's legal liability in numerous lawsuits from families of victims of what the United States considers Libyan terrorist acts. It also paves the way for stronger ties between the two nations and increased U.S. involvement in the oil-rich nation.

"This resolves the last major historical issue that has stood in the way of a more normal relationship between our two countries," Welch said.

The deal had hinged on congressional approval. Last month, just before leaving for summer recess, Congress unanimously adopted the Libyan Claims Resolution Act, sponsored by Sen. Frank R. Lautenberg, D-New Jersey. The legislation cleared the way to end the feud with Libya over terrorist attacks and creates a fund for victim payments.

"The Libyans didn't believe that Congress would ever be helpful, and Congress didn't think Libya would ever do it," Welch said Thursday. "We found a diplomatic way to accommodate both sides by turning suspicion into an asset."

Under the new law, Congress gives the Bush administration the authority to restore sovereign immunity for Libya only when the United States receives the agreed-upon money to pay American claimants in the fund and the secretary of state certifies it.

See a timeline of events following the Pan Am attack »

Once the money is received into the fund, Libya would be exempted from legislation passed this year enabling terrorism victims to be compensated from frozen assets of governments blamed for attacks.

Libya has paid 268 families involved in the Pan Am bombing $8 million each of a $10 million settlement. It was withholding the remaining $2 million owed to each family over a dispute regarding U.S. obligations to Tripoli.

Under the deal, Libya would pay more than $500 million to settle remaining claims from the Lockerbie case and more than $280 million for victims of the La Belle disco, according to Jim Kreindler, the lead attorney for the Pan Am families.

It would also set aside funds to compensate victims of several other incidents blamed on Libya but for which Libya hasn't accepted responsibility. The total settlement could exceed $1 billion.

The pact, supported by the victims' families, closes the book on a contentious period in U.S.-Libyan relations. Ties between the two countries began to improve in 2003, when Libya gave up its weapons of mass destruction program and began compensating Lockerbie victims.

But lingering lawsuits prevented the two countries from fully normalizing ties. A joint U.S.-Libya statement issued Thursday in Tripoli said "both parties welcomed the establishment of a process to provide fair compensation for their respective nationals, and thereby turn their focus to the future of their bilateral relationship."

This spring, Libya made a proposal to the Bush administration that held some promise in settling the dispute, Welch said. Over the next several months, he and State Department lawyers held closed-door negotiating sessions with the Libyan delegation in London, England; Paris, France; Berlin; and Abu Dhabi, United Arab Emirates, where he finally secured a tentative agreement in late July.

The afternoon he came back from Abu Dhabi, Welch met with Lautenberg and urged passage of the legislation.

Welch said Libya would expect an end to the claims and put the longstanding dispute with Libya to rest, despite the lingering mistrust of Libyan leader Moammar Gadhafi.

"This could not have worked without a great deal of honesty on everyone's part," Welch said.

On Thursday, Lautenberg issued a statement expressing satisfaction with the agreement.

"For too many years, Libya has refused to accept responsibility for its horrific acts of terror against American victims," he said.

"The signing of this agreement means these victims and their families can get the long overdue justice they deserve. Today's agreement is a critical development in moving Libya forward on its path toward diplomatic respect," he said.

The State Department said the "agreement is being pursued on a purely humanitarian basis and does not constitute an admission of fault by either party."

But it also allows Libya to settle outstanding claims for U.S. air strikes on Tripoli in 1986, in which Libya claims more than 40 of its citizens were killed, including Gadhafi's adopted daughter.

Donations to settle Libyan claims would be placed in the "voluntary" fund, from which each country involved in the claims draws the money to pay its citizens.

Welch said no U.S. taxpayer money would be used to compensate Libya but said he was "optimistic" donations to settle Libyan claims would be made. Other senior U.S. officials said American companies eager to do business in Libya could possibly make a contribution.

The deal is to be followed by a U.S. upgrading of relations with Libya, including the confirmation of a U.S. ambassador and possible American aid. Secretary of State Condoleezza Rice is expected to visit Libya before the end of the year.

All About Libya • Pan American Airways