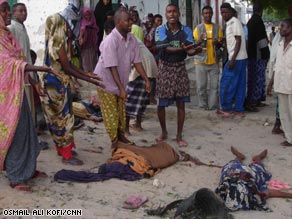 Mogadishu residents gather around victims of the bomb attack along the city's Maka Al Mukarama Road.

The bomb blast wounded another 46 people, most of them Somali women who had gathered to clean Maka Al Mukarama Road in southern Mogadishu's Kilometer 4 district, according to Medina Hospital director Dr. Dahir Dhere.

"It suddenly turned the area into a carnage, scattering body parts of the street cleaners into a large area," said witness Asha Ise Gedi. "There were pools of blood everywhere. I have never seen such mass killing."

"They were innocent poor mothers or sisters," Gedi said. "Why did they deserve this?"

It is unclear who is behind the attack.

Mogadishu Mayor Mohamed Omar Habeb Mohamed Dhere, who was recently fired by the country's prime minister, blamed the Islamic Courts Union for waging the attack. But the head of the Islamist insurgent group, Abid Rahim Ise Adow, denied any involvement and blamed Somalia's government for orchestrating the attack.

The victims were participating in a program that allows Somali women to work as street cleaners in exchange for food. The United Nations' World Food Program organized the program, which began last year and is administered by Mogadishu's regional authority.

Mogadishu has been the site of violence in recent months between Ethiopian troops and Islamist fighters.

Somalia's current transitional government is trying to maintain control of the capital, with the help of the better-equipped Ethiopian forces.

Nur Ade said he suspects the mass resignations were aimed at weakening implementation of the peace agreement between Somalia's transitional government and the opposition Alliance for the Re-Liberation of Somalia.

He said he had no plans to resign.

The peace agreement, signed June 9 in Djibouti, calls for a cease-fire between Somalia's U.N.-backed transitional government and the Alliance for the Re-Liberation of Somalia, an opposition group that includes members of the Islamist Court Union which overthrew the government in 2006.

The ICU was ousted from power later that year by Ethiopian forces, with the support of Somalia's transitional government.

If followed, the peace deal would pave the way for a withdrawal of Ethiopian troops -- a major sticking point for Islamist fighters who oppose their presence.

The agreement calls on the alliance to dissociate itself from armed groups still fighting the government and for all sides to allow "unhindered humanitarian access and assistance" to all Somalis.

A joint committee led by U.N. officials will monitor the agreement's implementation.

Ethiopian forces became embroiled in an Islamist insurgency after the Ethiopian forces invaded Somalia in December 2006 to overthrow the ICU leaders and reinstall the transitional government. As guerrilla attacks mounted, efforts to replace the Ethiopians with an African Union-led peacekeeping mission faltered.

Ethiopia's invasion had the blessing of Somalia's government and the United States, which accused the ICU of harboring fugitives from the al Qaeda terrorist movement.

The conflict displaced hundreds of thousands of Somalis, further worsening a humanitarian crisis that dates back to the collapse of the country's last government in 1991.

The situation has been exacerbated by drought, continual armed conflicts in central and southern Somalia, and high inflation on food and fuel prices.

All About Somalia • Ethiopia