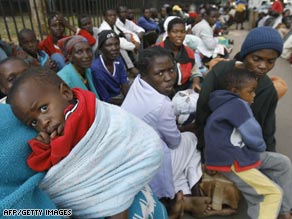 About 200 victims of election violence seek safety outside the U.S. Embassy in Harare, Zimbabwe, this month.

"The new executive order significantly enhances our ability to designate individuals in and entities connected to the Mugabe regime," Bush said in a written statement that calls the Zimbabwean government under president Robert Mugabe "illegitimate."

Just after the announcement, the Treasury Department said it has designated for sanctions 17 entities, including three government-owned or controlled companies used by Mugabe and his government "to illegally siphon revenue and foreign exchange from the Zimbabwean people," as well as one individual.

"This action is a direct result of the Mugabe regime's continued politically motivated violence, disregarding calls from the Southern African Development Community, the African Union and the United Nations to halt the attacks," the White House said.

"The regime has also continued its ban against NGO activities that would provide assistance to the suffering and vulnerable people of Zimbabwe. No regime should ignore the will of its own people and calls from the international community without consequences."

The U.S. has been pushing for sanctions against Zimbabwe since Mugabe ignored a U.N. Security Council appeal to postpone a presidential runoff election June 27. The vote initially was intended to be a runoff between Mugabe and opposition candidate Morgan Tsvangirai, who did not win the presidency outright in the general election, according to government tallies.

But Tsvangirai, of the Movement for Democratic Change, withdrew just before the vote, saying Mugabe's supporters had orchestrated a campaign of beatings, intimidation and murders against Tsvangirai supporters.

Earlier this month, Russia and China vetoed a Security Council resolution pushed by the United States, Britain and France that would have imposed international sanctions on Mugabe and senior members of his government. Bush said last week he was "displeased" at the vetoes, but the Treasury and State Departments were working on potential U.S. action.

Assistant Secretary of State for African Affairs Jendayi Frazer told members of Congress last week that more than 100 people have been murdered, more than 3,000 have been injured by beatings or torture and more than 30,000 have been driven from their homes because of violence that broke out after the general election.

Entities designated by the Treasury Department include Minerals Marketing Corp. of Zimbabwe, the company that serves as the sole marketing and export agent for all minerals mined in Zimbabwe except gold and silver; Zimbabwe Mining Development Corp.; and Zimbabwe Iron and Steel Co., among others.

The individual named is Thamer Bin Saeed Ahmed al-Shanfari. The Treasury Department said he is an Omani national who has close ties to Mugabe and his top officials and uses his company, Oryx Natural Resources, to "enable Mugabe ... to maintain access to, and derive personal benefit from, various mining ventures in the Democratic Republic of the Congo.

Under the sanctions, any assets tied to al-Shanfari or to the designated companies that are within U.S. jurisdictions must be frozen, and people living in the United States are prohibited from doing business with them.

On Monday, Mugabe and Tsvangirai signed an agreement that paves the way for power-sharing talks to take place in the next few weeks. They will be mediated by South African President Thabo Mbeki, as a representative of the Southern African Development Community, and Jean Ping, chairman of the African Union Commission.

Bush said Friday the United States is ready to provide a "substantial assistance package, development aid and normalization with international financial institutions" should those talks result in a new government "that reflects the will of the Zimbabwean people."

In the meantime, the president said he is authorizing the use of up to $2.5 million from the U.S. Emergency Refugee and Migration Assistance Fund to assist Zimbabwean refugees and those displaced by the violence. In addition, he said the United States will continue efforts to provide food and medical care to Zimbabweans.