The plight of the wildebeest

MASAI MARA, Kenya (CNN) -- The migration of more than a million wildebeest between Kenya and Tanzania is one of the wonders of the natural world. Tourists from around the globe have flocked to Kenya to witness the herds streaming across the savanna and over the Mara River. 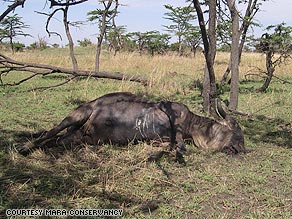 Poachers set steel snares amongst the thorn trees to capture wildebeest headed on their annual migration.

But now this annual migration is under threat from poachers. "When the animals come into Kenya there is this big influx of poachers," says Brian Heath, CEO of the Mara Conservancy that manages animal protection in the border regions of the park.

"Unless we control it we are in danger of the number of animals being poached not being able to sustain the population."

The conservation NGO depends on tourists to finance their anti-poaching operations. A portion of each tourist's entrance fee goes to their operations. They have had plenty of funding in normal years, but this is not a normal year in Kenya.

The political violence stemming from Kenya's disputed election caused visitors to cancel their trips or look elsewhere for their vacation. And though the country has been peaceful for months, the tourists have stayed away.

As a result, the Mara Conservancy is running at a massive shortfall and has had to scale back on anti-poaching efforts. The low numbers of tourists hurts the economy in Kenya, but it also puts the wildlife at risk.

Watch how poaching is threatening the wildlife of the Masai Mara »

"If we cannot run our operations as normal, then we fear that poachers may invade the park, kill the animals and then at the end of the day we do not have animals. They will destroy the Mara," says Joseph Kimojino, one of the head rangers.

It sounds alarmist, but the facts back him up. Every herd requires a critical mass to survive and to move. Experts believe that between 40,000 and 100,000 wildebeest are poached a year. If the poaching increases to a certain level, it could spell disaster.

"If the numbers of animals in the migration were to reduce below a certain number then that migration may not be sustained into Kenya," Heath warns. "And that would have a huge and devastating effect on Kenya's tourism."

The rangers are after an elusive foe. The majority of the poachers come from Tanzania. They sneak over the fenceless border and hunt animals for bush meat.

Watch David McKenzie's behind the scenes report on shooting this story »

During the migration, they set up snares made from steel wires. The snares are meant for the wildebeests, but they kill indiscriminately, tearing into the flesh of zebras, giraffes, hyenas and even elephants.

Though they have had to cut back on patrols, the rangers haven't given up yet.

Joseph Kimojino, after 20 years at the park, has started a blog to try and raise money for the anti-poaching efforts. Read Joseph Kimojino's blog

But without their efforts the migration would certainly be under threat and one of the most breathtaking scenes of nature could disappear forever.

All About Kenya • Wildlife • Tanzania