(CNN) -- President George W. Bush has urged the international community to punish the Zimbabwe government for suppressing its political opponents and using violence at the ballot box 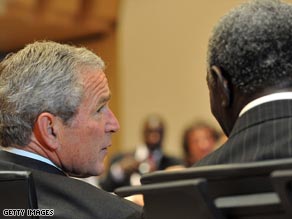 "I care deeply about the people of Zimbabwe," Bush told the G-8 annual summit in Hokkaido Toyako, Japan. "I am extremely disappointed in the elections, which I labeled a sham election."

Incumbent Zimbabwe President Robert Mugabe maintained power as the only candidate in last month's election. His only challenger, opposition leader Morgan Tsvangirai, withdrew from the race.

Tsvangirai said his Movement For Democratic Change party decided not to participate because of an ongoing campaign of political intimidation and violence at the hands of Mugabe supporters.

Tsvangirai won the most votes in the March 29 election, but not enough -- according to official figures -- to avoid a runoff.

UK Prime Minister Gordon Brown, also at the G-8 summit, said Monday that he believes "there is growing support for sanctions against the Mugabe regime" because very few countries recognize his government.

The British prime minister added that there is growing support for a U.N. envoy to be dispatched to "to make sure that the parties in Zimbabwe know that we've got to work for a transition so that there is a legitimate government, one that we can support, and one, when it does exist, we will want to help with the reconstruction (of Zimbabwe)."

Jakaya Kikwete, president of Tanzania and current head of the African Union, is one of seven African leaders at the summit. AP reported him as saying on the issue of Zimbabwe "that the only area that we may differ is on the way forward.

"We are saying no party can govern alone in Zimbabwe, and therefore the parties have to work together in a government and look at the future of their country together."

"I believe this is an agenda that is not a British agenda or a Western agenda but a humanitarian agenda around which the world can unite," said Miliband in a speech at the University of South Africa in Pretoria.

The UK has been a harsh critic of Zimbabwean President Robert Mugabe who Miliband blamed for turning "the weapons of the state against his own people" in order to retain his grip on power.

Mugabe has been Zimbabwe's only leader since independence in 1980, before which it was called Rhodesia and ruled by the UK. Britain is one of many countries that do not recognize Mugabe's reelection.

Miliband has called for the current Mugabe government to be replaced by a transitional government to be led by Tsvangirai. He is visiting South Africa, a member of the U.N. Security Council which is expected to consider a sanctions resolution against Zimbabwe.

"The world community needs to unite at the U.N. this week not just to condemn violence but to initiate sanctions on the regime and send a human rights envoy to Zimbabwe," Miliband said.

All About G-8 • Zimbabwe • African Union