(CNN) -- British mercenary Simon Mann faced a possible verdict Friday in his trial on charges of plotting a coup in Equatorial Guinea -- a plot which Mann has testified was financed and planned by others. 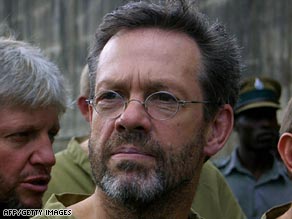 Simon Mann was arrested after a plane carrying him and about 60 mercenaries landed in Zimbabwe.

Mann testified Thursday that he was a "junior" in the organization which plotted to overthrow the country's president in 2004, and that Lebanese businessman Eli Calil was the man in charge.

Footage of the proceedings was broadcast by Britain's Channel 4 News, which says it has the only camera in the courtroom.

The trial opened Tuesday and a verdict was possible within days, officials said.

Also Thursday, the South African government rejected Mann's allegation that it had given its tacit support for the coup plot.

"South Africa will never, tacitly or expressly, support the use of mercenaries to bring about fundamental political changes in any country in our continent or elsewhere in the world including Equatorial Guinea," the government said in a statement.

Mann testified Wednesday that several governments, including Spain and the United States, welcomed the idea of a coup.

"Those like Simon Mann and his ilk must fully understand that the days of military coups are indeed over and those implicated in such activities will indeed face the full might of the laws of the countries of our continent," the South African government said.

Mann is a former British army commando who was arrested four years ago after a plane carrying him and about 60 mercenaries landed in Zimbabwe. The government of Equatorial Guinea said the group was on its way to overthrow its president, Teodoro Obiang Nguema Mbasogo, but Mann said at the time that they were going to guard a diamond mine in the Democratic Republic of Congo.

A Zimbabwe court convicted Mann of trying to buy weapons illegally. He served four years in jail there before being extradited to Equatorial Guinea's capital of Malabo earlier this year to face charges of leading an abortive coup.

Mann testified earlier this week that his former friend Mark Thatcher -- the son of former British Prime Minister Margaret Thatcher -- was a main partner in the plot.

Thatcher was arrested along with Mann in 2004, and he pleaded guilty in South Africa the following year to unwittingly bankrolling the plot. He escaped jail time by paying a fine.

Thatcher admitted giving $275,000 toward the charter of a helicopter, saying he thought was for commercial purposes and discovered only later it was to be used by mercenaries. But Mann said Thatcher paid $350,000 for a helicopter and a plane which he knew would be used in the plot, and that he attended meetings about the plan with Calil in London.

Calil, Mann said, initially asked him to assassinate President Obiang and talked about the possibility of staging a guerrilla war. Mann testified he refused both requests, considering them unethical, but he did agree to help stage a coup.

Though he said Thatcher was a top figure in the plot, Mann testified Thursday that even Thatcher was under Calil in the group's hierarchy.

"When Mark Thatcher joined, even though Calil actually knew Mark Thatcher from before, even despite that, I had to take Thatcher to London," Mann testified. "Calil had to sit down with him and basically interview him and tell him the 'Calil rules' before Thatcher was in. And that applied to everybody."

Mann, appearing in a gray prison outfit, emphasized that he was not the man in charge.

"Calil was very much the boss, so nothing could happen without Calil telling me yes or no," Mann testified. "I was like the employee and I needed a contract from the bosses. ... I was always reporting to Calil, the meetings (were) always in his house, never mine, and there (were) also many meetings to which I (did) not go."

Mann's defense lawyer took 45 minutes to question Mann on Thursday, Channel 4 reported, in contrast to the four hours of prosecution questioning Mann faced the day before.

When asked by a reporter whether he expected Thursday's questioning to last longer, Mann simply said "no." Mann smiled often in the footage shown by Channel 4 and even stuck his tongue out playfully at the camera.

After his stint in the British army, Mann was affiliated with the South Africa-based mercenary firm Executive Outcomes. The firm described itself on its now-defunct Web site as a "military advisory service" that had played a "crucial" role in ending two African civil wars.