(CNN) -- "When I visit Malawi, I visit my family at the graveyard," says Marie Da Silva, who knows the impact of AIDS all too well. 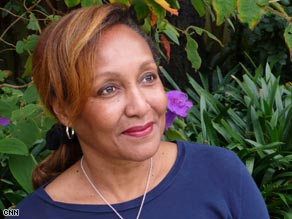 Marie da Silva says the name for her school comes from the Jacaranda tree, which symbolizes hope.

Born and bred in Malawi, in southern Africa, Da Silva lost 14 family members, including her father and two brothers, to the disease.

"AIDS is like The Plague in Malawi," says Da Silva.

According to UNAIDS, 14 percent of the country's adult population is infected with HIV and more than half a million children have been orphaned by the disease.

"Orphans [in Malawi] are very underprivileged -- the grandparents are trying to raise them, with no money, no food, no clothes," she says. "Just poverty."

But from halfway around the world, as a nanny in Los Angeles, California, Da Silva provides a place where the orphans can get away from that -- The Jacaranda School.

In 2002, Da Silva learned that the school in her southern Africa home town was going to close. Consumed with concern for the students, she urged her mother to let them gather and learn in their family home, with her financial support.

"All the while I was doing my best for the kids here -- making sure they're doing their homework, eating well," she remembers.

"I couldn't sleep just thinking about the children that need the same thing back in Malawi," says Da Silva.

Thanks to Da Silva's passion, the school is now thriving in her childhood home and more than 200 children, most of whom are AIDS orphans, receive porridge every morning and education, free of charge. It is an effort that Da Silva funds almost entirely herself, sending $1,000, about one-third of her monthly paycheck, to pay the salaries of 12 teachers and the headmaster, and purchase whatever supplies she can afford. Several of her fellow nannies have even gotten involved, donating $10 a month to her foundation. Get involved: Jacaranda Foundation

While the classes are crowded and resources are few (there are only 15 books in the library, according to Da Silva), her efforts are working.

"We have kids studying in our family living room, kitchen, gazebo, you name it. They're so hungry to learn," Da Silva explains. "This is their sanctuary."

Da Silva named both the school and its supporting foundation after the Jacaranda tree. Not only does the tree grow both in Malawi and Los Angeles, but when her father was dying, she found solace in a blossoming Jacaranda tree that she could see from his hospital window.

"For me, the Jacaranda tree symbolizes hope, and that's what I want to give to the children at the Jacaranda School," she says. "After the deaths of my family members and...seeing how everything else is suffering, the only way around this was if kids have a future."

She dreams of building a new school with lab facilities and a real library one day.

"I just feel that if you give them the tools, they can be somebody. And that's my mission."