(CNN) -- The Northwest braced for blizzards Friday night while cities from Milwaukee, Wisconsin, to Boston, Massachusetts, were cleaning up after a major storm delayed air travel and created havoc on the ground. 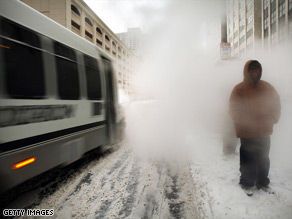 "This is essentially the reincarnation of the same storm that brought the heavy snow to parts of California, southern Nevada and northern Arizona," Steve Corfidi, lead forecaster with the weather service's Storm Prediction Center in Norman, Oklahoma, told CNNRadio.

Icy roads created from storms this week paralyzed much of the greater Seattle, Washington, area, where schools were closed and bus routes were suspended Friday as roads were too icy to navigate.

Two charter buses carrying 80 people that collided and skidded off a road were pulled to safety, CNN affiliate KOMO reported.

The buses crashed through a metal railing and hung precariously over Interstate 5 for several hours before tow trucks pulled them back on the road, KOMO reported.

"We hit it and everyone is in shock for a minute, and [the driver] says 'go to the back of the bus.' And people threw each other out the windows," passenger Tamera Vasquez told KOMO.

Saturday was expected to bring heavy snows in Washington, damaging winds and power outages to a region still recovering from storms earlier in the week.

Hurricane-force winds are possible in the eastern foothills of Snohomish, King and Pierce Counties. Further west, several inches of snow are possible in the greater Seattle-Tacoma-Everett metro area Saturday afternoon. Toward the Olympic Mountains, they could be measuring new snowfall in feet.

Flights at most airports in the Midwest and Northeast were up and running after experiencing delays as long as three hours throughout the day. But storm warnings and watches remained in effect for most of region.

Corfidi said the storm is expected to maintain intensity into Saturday, continuing east and "spreading a swath of very heavy snow and freezing rain" into Pennsylvania and New York.

"There could easily be up to a foot of snow over parts of Illinois, northern Indiana, perhaps into parts of Michigan and southern Wisconsin, eastward into parts of New York and Pennsylvania," Corfidi said.

In Milwaukee, snowfall closed the airport for several hours and cut into local business hours for retail shops during the busiest shopping season of the year.

Malls and shopping centers in Milwaukee, Glendale, Wauwatosa and Greendale opened later than usual, dealing another blow to retailers already struggling with a severe economic downturn.

To compensate, some stores in the area, including Kohl's, Boston Store, J.C. Penney and Macy's are staying open until midnight on some days, the Journal-Sentinel Online reported.

"The snow has me concerned," Southridge Mall manager Mary Wenger told the newspaper.

Another four to seven inches of snow is expected over the weekend.

Elsewhere, police in Buffalo, New York, shut down the city's Skyway highway because of winds and snow, CNN affiliate WGRZ-TV reported. Western New York had several inches of snow on the ground by noon, the station reported.

To the north in Ontario, Canada, southbound Highway 400 was shut down outside Toronto after an multivehicle accident in near whiteout conditions, CNN affiliate CTV reported.

"Lots of blowing snow. Visibility is next to nothing," CTV senior cameraman Tom Podolec reported from the scene.

The system should move quickly, Corfidi said. It was not shaping up as an extraordinary event, he said.

"It is December, and winter storms certainly raise their ugly heads this time of year," Corfidi said.

All About Winter Weather • Illinois • Pennsylvania