(CNN) -- Officials in Southern California issued mandatory evacuation orders Wednesday for residents of a sparsely populated area in the city of Yorba Linda after torrential rain threatened to spark landslides in canyons denuded of vegetation by recent fires. 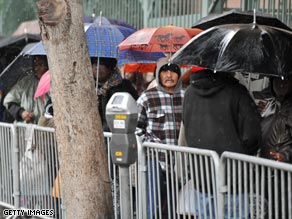 "We have had no slope failures at this point," said Mark Alders, a public information officer for the city.

He estimated the number of houses under the mandatory evacuation order -- all of them in the city's North Fairmont neighborhood -- at 300 to 400.

Ground crews were evaluating the slopes' safety, he said.

The alerts started after 1.5 inches of rain fell in four hours overnight, he said. Concerns grew Wednesday morning, when a 3.1-magnitude earthquake struck. Though it was not strong enough to be felt, officials felt that it might increase the odds of a landslide, Alders said.

Mandatory evacuation orders were issued before dawn for nearby Box Canyon, Brush Canyon and San Antonio, but they were changed to voluntary orders later Wednesday morning, he said.

The structural integrity of the area's canyons was threatened November 15 and 16, when the Triangle Complex Fire, also known as the Freeway Complex Fire, swept through the area. The blaze destroyed 118 houses and damaged many others, but no one was killed.

The fire stripped the area's slopes of trees and brush and left behind a layer of ash that could easily be washed away by rain.

But $1 million in mitigation efforts undertaken in the past 11 days appears to have worked, Alders said.

With the heavy rain ended and only light showers forecast, he predicted that the last of the mandatory evacuation orders would be rescinded Wednesday.

All About Yorba Linda • California • Weather