(CNN) -- A tropical storm strengthened into Hurricane Kyle on Saturday as it churned in the Atlantic Ocean west of Bermuda, the National Hurricane Center reported. 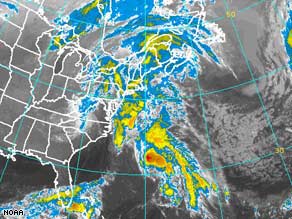 Forecasters issued tropical storm and hurricane watches for coastal Maine on Saturday. Kyle, a Category 1 hurricane, is forecast to make landfall late Sunday or early Monday near the border between Maine and Canada.

The Bermuda government discontinued a tropical storm warning for the island after it dodged a direct hit.

As of 11 p.m. ET Saturday, Kyle's center was about 355 miles (570 kilometers) of Nantucket, Massachusetts, and 555 miles (895 kilometers) south-southwest of Yarmouth, Nova Scotia.

Watch how Kyle could move »

Kyle was moving north at near 23 mph (39 kph) and was expected to gradually turn north-northeast by late Saturday, the National Hurricane Center said. "On the forecast track, the center of Kyle is forecast to be near eastern New England or the Canadian Maritimes late Sunday." See where the storm is going

A hurricane watch, meaning hurricane conditions are possible within 36 hours, was issued for coastal Maine from Stonington to Eastport.

A tropical storm watch was issued for areas south of Stonington to Cape Elizabeth, including Portland. The watch means tropical storm conditions are possible within 36 hours.

The storm could bring 4 inches of rain to New England, with isolated amounts of 6 inches possible in some locations through Monday.