SOUTH PADRE ISLAND, Texas (CNN) -- As his fishing boat, Murphy's Law, was tossed about Wednesday in the path of Hurricane Dolly, Steven Murphy hoped to dodge the adage his vessel is named for: "If anything can go wrong, it will." 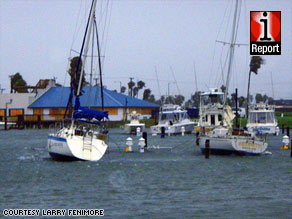 Murphy, owner of Captain Murphy's Fishing Charters, was riding out the storm in the 65-foot double-decker boat tethered to a pier at South Padre Island, Texas, just north of Brownsville.

"I don't know if you can hear that wind, but it's really blowing. It's like a tornado," he said. "It's starting to tear it up real good."

Dolly strengthened into a Category 2 storm Wednesday with 100-mph winds as it lashed the south Texas-Mexico border, sending residents and military personnel scurrying for safety and forcing people on South Padre Island to hunker down to wait it out.

The hurricane was reclassified to a Category 1 at midafternoon, not long after its eye came ashore at South Padre Island. Forecasters said its winds had decreased to about 95 mph.

"It's probably not the best decision to ride it out," said Murphy, 41, but he said he felt that he didn't have a lot of choice.iReport.com: Murphy's Law striking Murphy's Law?

Only one shipyard in the area can pull a boat such as his out of the water, he said, and there are more boats than there are spaces, "so you pretty much have to man it."

See the projected path of the storm »

The charter company is a family business, and Murphy has been working on boats since he was 9.

He said his brother was in a boat anchored next to Murphy's Law. He was alone because his deckhands left.

View photos from the storm zone »

Murphy was accompanied by his girlfriend, Lisa Graves, and the captain of the company's third boat, which had been hauled out of the water.

"When they told us about the hurricane, they said 80 mph max," Murphy said.

"It's absolutely outrageous here. The winds are high. ... I can't describe it," Graves said. "In all my life, I've never seen anything like this.
iReport.com: See another iReporter's footage from Brownsville, Texas

"We've had a sailboat that broke off the docks across the way and got caught up on our bows. We had to run out and cut the anchor line."

"If this is it, this isn't all that bad, [but] it probably wasn't the wisest thing," he said.